Brig. Gen. Doug Schiess: Three launches in a week has not been done in Florida since 2001
SpaceNews 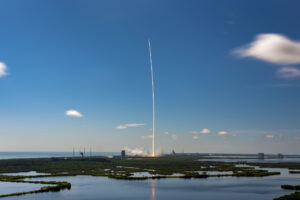 WASHINGTON — For the first time since 2001, Cape Canaveral will attempt to launch three rockets over three days.

Scheduled for Aug. 27 is a United Launch Alliance Delta 4 Heavy National Reconnaissance Office mission. On Aug. 28 a SpaceX Falcon 9 rocket will launch the SAOCOM 1B satellite for Argentina’s space agency followed by another Falcon 9 Starlink launch on Aug. 29.

It this works out, it will be historic, said Brig. Gen. Doug Schiess, commander of the 45th Space Wing that oversees the Florida space coast ranges.

Three launches in a week has not been done in Florida since 2001, Scheiss said Aug. 25 during a video call with reporters.

“And so the launches are continuing to increase, that’s due to national security space missions and a huge part due to our commercial missions,” said Schiess.

The manifest for the next three months has a Sept. 30 GPS satellite launch on a SpaceX Falcon 9, another NRO mission on a ULA Atlas 5 sometime in October, the first operational launch of the SpaceX Crew Dragon Oct. 23 and in November a ULA Atlas 5 launch of Boeing’s Starliner capsule uncrewed test mission.

Polar launch the first since 1969

SpaceX will launch Argentina’s SAOCOM 1B — an Earth observation satellite designed to provide radar imagery — to a polar orbit and will fly a southerly trajectory.

“It’s been decades since that’s been used,” said Schiess.

The last polar launch from the Cape was in February 1969 — the ESSA-9, also known as TOS-G, a meteorological satellite on a three-stage Delta rocket, a 45th Space Wing spokesman said.

After launching SAOCOM 1B, SpaceX will attempt to land the Falcon 9 booster on land at Landing Zone 1, rather than on a droneship at sea. The last time that happened was when SpaceX flew the CRS-20 Commercial Resupply Service mission to the International Space Station in March 2020.

Schiess said the southerly trajectory flight for the polar orbit mission was approved by the Federal Aviation Administration and does not pose a threat to the populations of southern Florida or Cuba as the rocket flies over those areas.

‘We have done an extensive amount of work to make sure that we’re safe,” said Schiess.

SpaceX has launched satellites to polar orbits from Vandenberg Air Force Base, California, but wanted to do this one from the Cape, said Schiess, because its payload “processing was here and it made more sense.”

The 45th Space Wing uses southerly trajectories for submarine ballistic missile tests, Schiess said, and noted that Vandenberg Air Force Base is the “premier location to launch to polar and I don’t see that changing.”