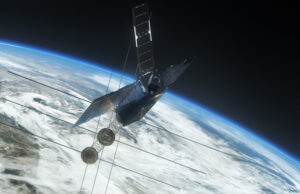 “This is great news to the team in Delft, showing an impressive pace in their efforts to develop a new laser-based communication system for small satellites,” Luis Gomes, AAC Clyde Space CEO, said in a statement. “This is a technology that will accelerate our deployment of data intensive space missions, paving the way for more capable Earth monitoring satellites, and in the near future, complex data communication networks in space.”

The CubeCAT verification will rely on a network of optical ground stations, including a station the Dutch Independent Research Institute, TNO, is developing in the Hague, Netherlands, and an ESA ground station in Tenerife, Spain.

Hyperion, a Dutch company acquired by AAC Clyde in October, developed the CubeCAT laser terminal with TNO. The CubeCAT terminal, which fits in a single-unit cubesat, is designed to downlink satellite data at speeds as high as one gigabit per second and to uplink data at speeds of 200 kilobits per second.