Aerojet Rocketdyne has completed the assembly of the first AR1, a new rocket engine funded by the U.S. Air Force.
SpaceNews 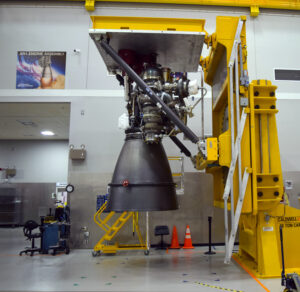 WASHINGTON — Aerojet Rocketdyne has completed the assembly of the first AR1, a new rocket engine funded by the U.S. Air Force. The company does not yet have customers for the engine and plans to market it for first-stage boosters in medium-sized launch vehicles.

Congress in the 2021 defense bill allocated $15 million for the testing of large kerosene engines at Stennis. The funds are not specifically earmarked for the AR1. Maser said the company hopes the funds will be used to test its new engine.

Maser said the 500,000-pound thrust AR1 is the first oxygen-rich staged combustion kerosene engine of this class built in the United States. The company originally developed the engine with U.S. Air Force funding as a possible replacement of the Russian RD-180 that powers the first stage of United Launch Alliance’s Atlas 5 rocket.

After Congress directed the Air Force to end its reliance on Russian engines, the service in 2016 awarded Aerojet a more than $800 million contract for development, testing and certification of the AR1. The contract was later reduced to $350 million after ULA decided to go with a different engine — Blue Origin’s BE-4 — to power the first stage of its new Vulcan rocket.

After losing the ULA deal, Aerojet continued on with the development of AR1 and now believes it has a future in the medium-size launch vehicle market. The company last year signed an agreement with launch startup Firefly Aerospace for the possible use of the AR1 engine in Firefly’s future launch vehicle to lift medium-sized payloads.

A key market driver will be the U.S. Space Force. The service last year started market research on next-generation launch vehicles and might consider investing in medium-size launch capabilities later this decade. Commercial investments likely will follow if the military commits to this market.

The next hurdle for the AR1 will be to get a test stand at Stennis. The center currently mostly tests hydrogen engines and would have to reconfigure one of its test stands to accommodate a kerosene engine like AR1.

Aerojet Rocketdyne is in the process of being acquired by Lockheed Martin. Neither company could comment on how the acquisition would affect AR1.