The Aerospace Corp. is working to license commercially a laser communications subsystem that downlinked data at a rate of 200 megabits per second from three-unit cubesats.
SpaceNews 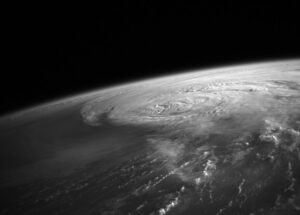 AN FRANCISCO – The Aerospace Corp. is working to license commercially a laser communications subsystem that downlinked data at a rate of 200 megabits per second from three-unit cubesats.

The Aerospace Corp. demonstrated the latest version of its laser communications subsystem on the Rogue Alpha and Beta cubesats built for the U.S. Space Force Space and Missile Systems Center as part of an effort to identify the challenges inherent in rapid production of miniature remote sensing satellites.

Aerospace built the Rogue Alpha and Beta cubesats with visible and infrared sensors in 16 months at a cost including launch of roughly $4.1 million. The cubesats were deployed Jan. 31 from the Northrop Grumman Cygnus capsule.

On Oct. 20, Aerospace released still images and video captured by the Rogue Alpha and Beta cubesats of Hurricane Sally as the Category 2 storm made landfall over the Alabama-Florida border on Sept. 16.

“I think there is an excellent future for these small satellite missions to act as both exploratory science demonstrations and potentially in constellations to act as helper satellites to the larger satellites,” Dee Pack, Aerospace Corp. Space Science Applications Laboratory director, told SpaceNews. “We showed that you can get extremely high frame rates on storm system imagery.”

The Rogue cubesats showcased improvements in the Aerospace laser communications technology since the 2018 Optical Communications and Sensor Demonstration transmitted data at a rate of 100 megabits per second.

“This is not technology of tomorrow,” said Darren Rowen, xLab Small Satellites Department director. “This is something that is being used today.”

As a federal research and development center, Aerospace does not produce commercial components in high volumes. If a government agency or commercial customer wants to equip a constellation of satellites with the laser communications subsystem, Aerospace would need to transfer the technology to a commercial industry partner.

While some people are quick to dismiss the capabilities of cubesats, the Rogue mission shows they can provide operational utility, Rowen said.

Larger small satellites would cost more to build and launch, an important factor in planning constellations.

“The difference between $4.1 million and $15 million is a lot when you multiply by 200,” Rowen said. “That’s one of the reasons that Aerospace is focused on continuing to push the state of the art with respect to miniaturization of these types of systems, to continue to drive the cost lower.”

The primary challenge identified by the Rogue mission was packing the shortwave infrared optics in cubesats.

Because Aerospace was charged with finding technology quickly that could scale for large constellations, the Rogue cubesats were equipped with commercially available shortwave infrared cameras. Aerospace upgraded the cameras and added filters and custom optics.

“It was not a plug-and-play scenario,” Rowen said.