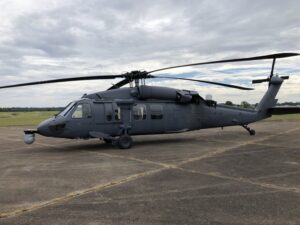 SAN FRANCISCO – After extensive testing, Hughes is ready to produce a beyond-line-of-sight satellite communications system for government and commercial helicopters.

“Our waveform is the secret sauce that allows us to transmit through the rotor chop or through the helicopter blades,” Wayne Marhefka, Hughes Defense and Intelligence Systems Division senior business development director, told SpaceNews. “The modem waveform has a unique capability to send [data] packets through the rotor blades continuously. Then it does a forward error correction on the other end to put the signal back together, so you get no packet loss.”

Hughes and industry partners obtained Federal Aviation Administration certification in May for the HeloSat communications system, which includes a Hughes modem, internal helicopter wiring developed by Applied Concepts Group of Middletown, Delaware, and a GetSat antenna mounted on the fuselage of a UH-60A Black Hawk helicopter.

The companies conducted testing and demonstrations in May, June and September in Tullahoma, Tennessee. For the tests, Hughes installed a Milli-H antenna from Israel’s GetSat in the Black Hawk radome.

The helicopter transmitted Ku-band communications through Intelsat’s Galaxy 18 satellite and Ka-band data through Inmarsat’s I-5 constellation. In addition, the Black Hawk relayed data through Appendix 30B, a sub-band of Ku-band, on Swedish broadband provider Ovzon’s network.

“We’ve tested this technology by transmitting data to the aircraft and off of the aircraft on about 14 different flights,” Marhefka said. “We broadcasted over 250 links to people in 11 countries. That is the true definition of beyond-line-of-sight satcom.”

Transmission rates varied based on the age and power of the communications satellite. During the testing in Tennessee, Hughes demonstrated data rates ranging from two to 17 megabits.

“In some cases, [military customers] want data transmitted to the helicopter as they’re in route to a particular location,” Marhefka said. “Or they may want to transmit surveillance data.”

“We’re talking to them about a beyond-line-of-sight satellite communications system that is relatively easy to put on or take off helicopters to transmit data of the race to broadcasters,” Marhefka said.

“Everybody wants to have data anywhere, anytime,” Marhefka said.

Hughes spent years developing the helicopter modems after realizing in 2013 that it had an appropriate waveform. At the time, however, satellite communications antennas were too large, heavy and power-hungry to mount on helicopters.

Seven years later, antennas are a fraction of their previous size and weight. Hughes conducted the recent demonstrations with a 10-kilogram GetSat antenna.

“Down the road, because of the open architecture if we needed to switch antennas, we could do that,” Marhefka said.