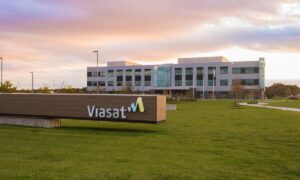 WASHINGTON — The incompatibilities between government and commercial satellite networks have been a nagging problem the U.S. Air Force has spent years trying to solve.

In an effort to come up with solutions, the Air Force Research Laboratory signed a seven-year $50.8 million contract last month with the global satellite communications company Viasat.

AFRL’s Space Vehicles Directorate will work with Viasat to figure out ways to integrate commercial satcom with government-owned satellites so they all operate as a seamless network.

The idea of an integrated “enterprise” network has been championed by the chief of the U.S. Space Force Gen. John Raymond. A document issued by Raymond in February 2020, titled “United States Space Force Vision for Satellite Communications,” said the current “loose federation” of satcom systems doesn’t provide enough resilience and cybersecurity for global military operations.

What the Space Force wants is a “hybrid architecture,” Christopher Paul, head of AFRL’s Space Vehicle Directorate small satellite portfolio, told SpaceNews. In the project with Viasat, “we will start to explore ways that we can use commercial constellations and technologies in a more integrated manner.”

Paul said AFRL will look at a “more holistic approach to future architectures that incorporates traditional large satellites, as well as commercial small satellites, other nontraditional providers as well as allies.” Paul said.

AFRL is taking on a problem the Air Force has studied for years in response to congressional demands that DoD take advantage of the growing commercial satellite capacity.

The Air Force in 2016 launched a three-year study on how the service could use commercial systems to augment and replace government-owned Wideband Global Satcom (WGS) satellites. That study was never publicly released. The Government Accountability Office wrote in a 2019 report that the Pentagon has not figured out how it will meet future demand for wideband satellite communications even though it has spent years studying the problem.

Craig Miller, Viasat’s chief technology officer for government systems, said the company will bring insight into this project from its experience building ground terminals for the Defense Department that are compatible with WGS and with commercial satcom systems.

“The goal we are trying to get to is to create a sort of flexible system that can use all the available transport resources whether it’s ours, commercial or somebody else’s,” Miller told SpaceNews.

The broader vision for the hybrid network is to be able to incorporate terrestrial systems as well, said Miller. Viasat also will propose ways to protect data from cyber attacks or other types of interference as it gets routed across a constellation of satellites.

The seven-year contract with AFRL is the type known as indefinite delivery, indefinite quantity, which gives the government flexibility to adjust projects. Initially Viasat will only be doing studies. “The results of those studies are going to inform the next steps, which we hope will be actual space based missions where we prototype and demonstrate some of these capabilities,” Miller said.

Demonstrations could be small satellite experiments and prototype ground terminals. The incompatibility of many of DoD’s user terminals with commercial satellites is a key reason why integration has been difficult.

“It’s important when possible to maintain backwards compatibility with existing terminals,” Miller said. “But in many cases there simply is a need for new terminals as we move forward.”

The Air Force developed a flexible modem interface so terminals can talk to WGS and to commercial geostationary satellites. But most of DoD’s existing terminals would not be compatible with low Earth orbit broadband services like SpaceX’s Starlink.