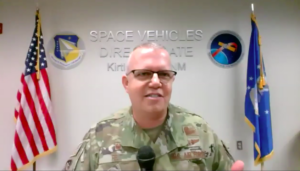 WASHINGTON — The Air Force Research Laboratory announced Sept. 2 it will pursue two new space experiments — one will test the performance of satellite instruments in low orbits and the other is to advance sensor technology to monitor cislunar space

The experiments are run by AFRL’s Space Vehicles Directorate at Kirtland Air Force Base, New Mexico.

The experiment known as “Precise” will study the physics of very low Earth orbit, or VLEO, which extends from 90 to 600 kilometers aboveEarth. AFRL said the experiment will examine the ionosphere and how gases impact radio propagation used for communications and navigation.

“The experiment will use sensitive satellite instruments and radio waves to examine changes in the ionosphere resulting from different compositions of ion source gases,” AFRL said in a statement.

Felt in June during a SpaceNews webinar mentioned that VLEO was an area of interest for AFRL. “This is like where you have to be thrusting all the time just to keep your satellite in orbit, at 200 to 300 kilometers,” Felt said.

The second project, named CHPS, will focus on space domain awareness beyond geosynchronous Earth orbit (GEO) all the way out to the moon.

“CHPS will explore concepts for object detection and tracking between GEO, where most U.S. Space Force satellites are flown, and the moon,” said AFRL.

NASA and commercial companies seek to harvest resources and return to the moon, Capt David Buehler, AFRL program manager said. “This increase in activity will require greater domain awareness. We want to be there providing safety of flight when the U.S. puts boots back on the moon.”

The CHPS experiment will investigate sensing technologies and algorithms for object tracking.

“We need to address really basic things that start to break down beyond GEO, like how do we even write down a trajectory. The current space catalog uses Two-Line Elements, or TLEs, which simply do not capture the complex orbital dynamics and have almost no meaning in cislunar space,” said Jaime Stearns, principal investigator.

The next steps for the project leaders will be to submit budgets, program timelines and specific technical objectives by Oct. 1.

At the SpaceNews webinar, Felt said the “best payoff comes from pursuing things that we’re not currently doing in space today.”