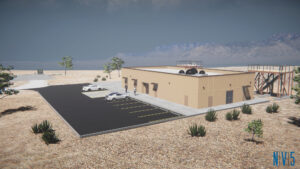 The Skywave Technology Laboratory will be a 3,500 square foot, $3.5 million facility located in a remote area on Kirtland Air Force Base, New Mexico, AFRL said March 18.

The lab is projected to open in October 2021, a spokesman said.

Col. Eric Felt, director of the Space Vehicles Directorate, said the lab is investing in new technologies to support the U.S. Space Force.

The lab will work on experiments to help measure and predict the space environment.

“Understanding the space environment is super important to our air and space forces,” Felt said. “The space environment affects many military systems and services, everything from the actual spacecraft operating in the environment to any radio frequency service that has to operate in or through space.”

The facility will be used by government personnel, in-house contractors, and industry and academic partners that have formal research agreements with AFRL.

Todd Parris, who leads space projects at AFRL, said space environment research work is being conducted in temporary shipping containers and looks forward to having a permanent facility. The research work will focus on “developing and testing new instrumentation, preparing for field experiments around the globe, as well as collecting and processing data to support ionospheric and radio frequency research.”

Many of the systems the researchers use to monitor the space environment require large antennas or distributed arrays of sensors. The new facility located on 72 acres will provide enough space to perform tests locally.