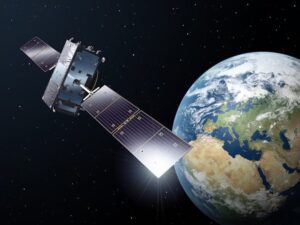 Airbus and Thales will each build six of the second-generation Galileo satellites under contracts that will be formally signed at the end of January. The combined value of the contracts is 1.47 billion euros ($1.78 billion), but the Commission did not disclose the value of each company’s contracts.

Galileo is one of the cornerstones of the European Union’s space activities and, combined with the Copernicus program of Earth observation satellites, account for nearly all the EU’s space budget. However, EU officials said both programs need to improve to keep pace with changing demands and growing capabilities outside Europe.

“Galileo and Copernicus must evolve. Otherwise, they will fast become obsolete,” warned Thierry Breton, commissioner for the internal market at the European Commission, in a speech Jan. 12 at the 13th European Space Conference. New technologies that will be incorporated into the next generation of Galileo satellites, he said, include digitally reconfigurable antennas, intersatellite links, more advanced atomic clocks and all-electric propulsion.

“The second generation of Galileo will have significantly improved service capabilities, notably in the field of secure navigation and resilience against emerging threats,” Breton said. At a press briefing later in the conference he declined to go into more details about the program, citing the pending contract award.

The contracts with Airbus and Thales shut out OHB Group, the prime contractor for the current generation of Galileo satellites. The European Commission said in its announcement that the European Space Agency, which partners with the EU on Galileo, performed a two-month technical and financial evaluation and recommended the awards to Airbus and Thales.

The statement noted there were three bidders, but did not disclose the third bidder. However, in a Jan. 20 announcement, OHB acknowledged that it had submitted a proposal and had been informed by ESA that it was not successful. That decision, it added, did not affect its ongoing contract to provide 34 Galileo satellites, 22 of which have already been delivered with the remaining 12 in various stages of production.

OHB partnered with Surrey Satellite Technology Ltd. (SSTL) for the current Galileo satellite contract, with SSTL providing the navigation payload. Such a partnership would not have been possible for the next-generation Galileo satellites since the United Kingdom, where SSTL is based, has left the EU and can no longer participate in the Galileo program.

At a Jan. 14 press briefing, Paul Verhoef, director of navigation at ESA, said SSTL delivered the final navigation payloads for the current generation of Galileo satellites in November. “It is, of course, unfortunate that the UK is now excluded from the navigation programs of the EU,” he said.

“We don’t expect to see UK participation on those programs,” he added, other that possibly components not available elsewhere. “This is what it is. This is the political reality of the day.”