The U.S. Army’s Redstone Arsenal in Huntsville, Alabama, was picked as the preferred location of U.S. Space Command’s headquarters.
SpaceNews 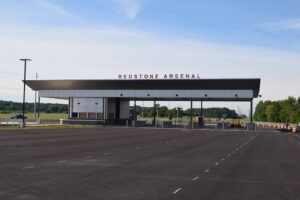 WASHINGTON — The U.S. Army’s Redstone Arsenal in Huntsville, Alabama, was picked as the future location of U.S. Space Command’s headquarters.

The selection of Redstone Arsenal is a huge win for Huntsville, nicknamed “Rocket City.” U.S. Space Command is currently based at Peterson Air Force Base in Colorado Springs. Alabama was considered a long shot and Colorado was the front runner, given its incumbent status and concentration of military installations and space industry contractors.

U.S. Space Command was established in August 2019 as the military’s 11th unified combatant command. The future headquarters will have approximately 1,400 military and civilian personnel.

“Huntsville compared favorably across more of these factors than any other community, providing a large, qualified workforce, quality schools, superior infrastructure capacity, and low initial and recurring costs. Additionally, Redstone Arsenal offered a facility to support the headquarters, at no cost, while the permanent facility is being constructed,” the Air Force said in a statement.

The selection process started in May when the Air Force launched an open bidding process. Bids were submitted from 24 states.

The Air Force revealed the shortlist of locations on Nov. 19 and a lobbying battle began as Barrett had indicated she planned to announce the winner before her time in office ends Jan. 14. A team of Air Force officials during the past month conducted in-person and virtual meetings with representatives from each locale.

For now, U.S. Space Command will remain at Peterson Air Force Base. The Air Force estimates it could take up to six years to complete an environmental review of the new location and stand up new facilities.

“The Department of the Air Force anticipates making a final decision for the location of U.S. Space Command headquarters in spring 2023, pending the results from the required environmental impact analysis,” the Air Force said. “Colorado Springs, Colorado, remains the provisional headquarters until the permanent location is ready to support the mission.”

Republican congressman Doug Lamborn, who represents Colorado Springs, sent a letter to President-elect Biden urging him to reverse what he called a “political decision” to move U.S. Space Command to Alabama.

“I am disappointed by the horrendous decision to rip U.S. Space Command out of its home in Colorado Springs and move it to a new location,” said Lamborn.