A proposal to replace the giant radio telescope at Arecibo Observatory in Puerto Rico with a new facility suggests it could be used for tracking space objects as well as for scientific research.
SpaceNews 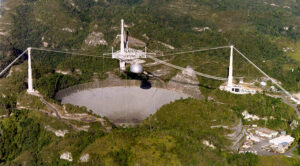 WASHINGTON — A proposal to replace the giant radio telescope at Arecibo Observatory in Puerto Rico with a new facility suggests it could be used for tracking space objects as well as for scientific research.

Plans for a potential replacement of the 305-meter radio telescope at Arecibo, whose observing platform collapsed Dec. 1, are still in their early phases. One proposal, developed by observatory staff and submitted to the National Science Foundation (NSF) in a recent white paper, calls for replacing the giant dish with an array of up to 1,000 small dishes, each nine meters across, on a platform spanning the current dish.

“As we move into the future, we feel that phased arrays are probably the right way to go, rather than continue to focus on large single-dish elements,” said Francisco Cordova, director of Arecibo Observatory, during a presentation at a Jan. 21 meeting of a committee supporting the ongoing planetary science decadal survey by the National Academies.

The concept in the white paper would double the sensitivity of the single-dish radio telescope and increase sky coverage by 250% compared to the fixed dish, as well as incorporate a new radar system. “From our perspective as the operator, we feel that the 305-meter was really an invaluable tool,” he said. “But, any future visions of the site really need to be centered around the development of a next-generation instrument.”

That new concept, Cordova said, could serve applications beyond astronomy and planetary science. One of the potential applications he listed on a slide in his presentation was space situational awareness (SSA).

“That particular capability really comes embedded into the concept of the next-generation telescope,” he said when asked by the committee about SSA. There has been strong interest by the “DOD community” for years in using Arecibo for SSA. “We’ve actually had many plans to incorporate those kinds of capabilities previously into the 305-meter, but we weren’t able to do it at the capacity we wanted to because of the limited sky coverage.”

The increased sky coverage of the proposed array, Cordova suggested, made it more useful for SSA applications. “That is something that would be baked into the instrument,” he said. “It is an area where we’ve gotten a lot of interest throughout the years, so we want to make sure that is also part of its capabilities.”

Cordova didn’t elaborate on that past interest by the Defense Department in Arecibo for SSA activities. The military has long operated its own radars for tracking objects, such as the new Space Fence. One company, LeoLabs, has established its own set of radars to support space traffic management services it offers commercially. None of these facilities are on the same scale as Arecibo.

It will be up to NSF to decide whether to build a replacement for Arecibo’s giant dish, and if so what form it will take and what applications it will serve. Congress, in its fiscal year 2021 omnibus appropriations bill, directed the NSF to provide a report within 60 days of the bill’s Dec. 27 enactment on options for repairing or replacing the telescope.

The loss of Arecibo leaves planetary scientists with primarily just a single radar at a NASA Deep Space Network antenna in Goldstone, California. “New planetary radar instruments are desperately needed,” Anne Virkki, a planetary scientist at the University of Central Florida and lead of the planetary radar science group at Arecibo Observatory, told the committee. “Relying on just Goldstone is not a long-term solution.”

“The two telescopes were highly complementary in terms of their capabilities,” said Lance Benner of the Jet Propulsion Laboratory, comparing Arecibo and Goldstone. Arecibo was 20 times more sensitive and could detect objects as twice the distance of Goldstone’s radar, while Goldstone could see more of the sky.

“Right now, we basically can’t replace it,” he said of Arecibo’s planetary radar. “There are no existing facilities that come even close to its capabilities that are currently available.”

However, there are radio telescopes that could provide some planetary radar capabilities in the relatively near future. The Green Bank Observatory in West Virginia tested a radar system on its 100-meter radio telescope in November, bounding radar signals off the moon that were then received by other antennas.

That test was intended to be a demonstration for a future, more powerful radar system, Karen O’Neil, director of Green Bank Observatory, told the committee. That later system could enter service as soon as 2024, she said, although it is still in the project definition phase.

The observatory is still working to secure funding for that radar. “We are talking in the tens of millions of dollars for the overall radar system,” she said.

An array of radio antennas with a radar would be even more expensive. A study by Caltech’s Keck Institute for Space Studies last year on next-generation planetary radar systems examined concepts for arrays of dozens to a hundred or more dishes, each tens of meters across. Such a system, Benner said, would likely cost half a billion dollars or more.