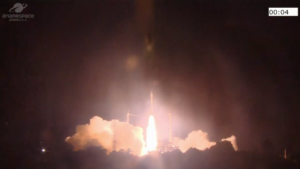 The European Space Agency, which along with the European Commission helped fund the proof-of-concept mission, announced plans in 2017 to launch the smallsat Vega mission in 2018. However, not all customers were ready by then, pushing the launch out to the second half of 2019.

Vega experienced its first-ever failure in July 2019, destroying the United Arab Emirates’ FalconEye-1 reconnaissance satellite and punting SSMS into 2020. Avio, the rocket’s manufacturer, traced the failure’s most probable cause to insufficient thermal protection in Vega’s second stage, the Zefiro-23.

ESA and the space agencies and militaries of France and Italy also participated in the failure investigation, Roland Lagier, Arianespace chief technical officer, said during the launch webcast. That review “identified a combination of weaknesses in the design, the manufacturing, and the control processes” within part of the Zefiro-23, he said. The failure review team produced 20 recommendations, of which 14 were mandatory prior to Vega’s return to flight, he said without going into specifics on those corrective actions.

Vega was deemed ready for its SSMS mission in March when the coronavirus outbreak became a global pandemic, leading to widespread travel bans and the cessation of launch activity at the Guiana Space Center. The French government, which oversees the South American spaceport, eased travel restrictions in May, allowing launch personnel to fly to the Guiana Space Center so long as they adhered to a 14-day quarantine after arrival.

Arianespace and Avio were again ready to launch Vega in June, but prolonged upper level winds blew the mission into August. Then a 19-day delay with an Ariane 5 launch bumped Vega to September. A final one-day delay occurred when Typhoon Maysak hit the Korean peninsula Sept. 1, preventing use of a ground station on the South Korean island of Jeju needed for telemetry during the Vega launch.

Arianespace’s SSMS mission carried satellites for 21 customers and from 13 countries. Czech company SAB Aerospace built the deployer used to carry all 53 spacecraft, including smaller deployers from other companies, and integrated the satellites into the rocket.

Remote sensing company Planet counted for nearly half the satellites on Vega. Planet had 26 SuperDove cubesats on the rocket — 14 that used QuadPack deployers from Innovative Solutions in Space (arranged by Spaceflight), and 12 on D-Orbit’s inaugural ION Satellite Carrier.

The largest satellite on the launch (excluding ION) was a 138-kilogram communications satellite Maxar Technologies built for an undisclosed customer, and for which Spaceflight also arranged the ride to orbit.

The launch also carried exactEarth’s ship-tracking satellite Esail, which OHB company LuxSpace built under an ESA contract. Esail was one of four ESA satellites on the launch, along with the science missions Simba and Picasso, and the Federated Satellite Systems mission, which carries an artificial intelligence experiment called PhiSat-1.

Kepler Communications’ third prototype internet-of-things satellite, TARS, a remote sensing microsat for Satellogic, and the OSM-1/Cicero cubesat for GeoOptics and Orbital Solutions Monaco, flew on the rocket as well.

Slovenia’s first satellite, Nemo-HD, launched on the rocket. Owned by the Slovenian Centre of Excellence for Space Sciences and Technologies, the satellite is designed to provide video and multispectral imaging.

Arianespace says it plans regular SSMS missions in the future with the next-generation Vega C, which is expected to launch in 2021. SSMS is designed for satellites up to 500 kilograms.