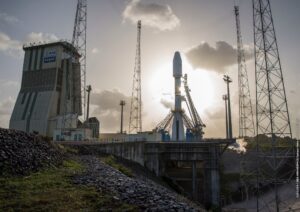 Arianespace will conduct 16 Soyuz launches for OneWeb, each carrying 34-36 satellites, to complete OneWeb’s internet megaconstellation by the end of 2022. The revised contract canceled two Soyuz launches, and removed OneWeb as the customer for the inaugural Ariane 6 launch, an Arianespace spokesperson told SpaceNews.

Arianespace conducted three Soyuz launches for OneWeb before the London-based megaconstellation company filed for Chapter 11 bankruptcy protection in March, halting a launch campaign that called for an average of one Soyuz launch a month through the end of 2021.

OneWeb said the revised launch contract is “subject to confirmation and consummation” of its restructuring plan. The British government and Indian telecommunications giant Bharti Global are buying the company, which ran out of funding while deploying its envisioned 650-satellite constellation. OneWeb said it still anticipates emerging from bankruptcy protection late this year.

OneWeb has 74 small broadband satellites in low Earth orbit. Its next batch of 36 satellites is now scheduled for December aboard a Soyuz launch from Russia’s Vostochny Cosmodrome.

OneWeb’s withdraw from the debut launch of Ariane 6, scheduled for no earlier than the second half of 2021, will not impact the rocket’s launch schedule, the Arianespace spokesperson said. Arianespace will try to find another customer in time for that launch, he said.

OneWeb said it anticipates starting service in 2021 over northern regions, including Alaska, Canada, Greenland, Iceland, the U.K., other northern parts of Europe and the Arctic Ocean.

The Arianespace spokesperson said two of the 16 Soyuz launches will take place from Europe’s Guiana Space Centre in French Guiana. The split between launches at Vostochny and Russia’s Baikonur Cosmodrome in Kazakhstan is still to be determined, he said.