The United States is the dominant space power and the “gains we possess are being threatened,” said Defense Secretary Mark Esper
SpaceNews 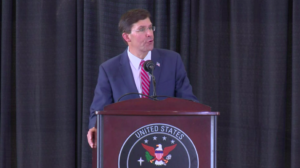 In remarks at the ceremony, Esper said U.S. Space Command — a military combatant command established a year ago after being deactivated for 17 years — will play a central role in national security defending U.S. satellites from foreign threats.

The United States is the dominant space power, said Esper, “and the gains we possess are being threatened.”

China and Russia are the most concerning adversaries because of their advanced anti-satellite weapons, said Esper. “Our competitors are seeking new ways to exploit our systems and undermine our military advantage.”

Just like air, land and sea, “space power will be essential to any future conflict,” said Esper.

Dickinson is the first Army officer to lead the military’s unified combatant command for space operations.

“We did a search, and many candidates were evaluated,” said Milley. He said Esper chose Dickinson for his combat experience and character. The head of Space Command is expected to provide objective and apolitical advice to the secretary of defense and the president in a time of crisis.

“This handover is huge for America and for the world,” Milley said of the change of command. “Space Command is so critically important in today’s world.”