Satellite operators in the Asia-Pacific say they are having discussions with companies planning large constellations of broadband satellites, but lack clarity on how such systems will work in their markets.
SpaceNews 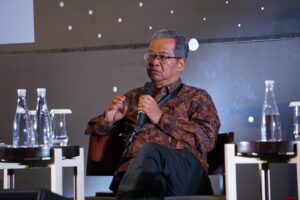 WASHINGTON — Satellite operators in the Asia-Pacific say they are having discussions with companies planning large constellations of broadband satellites, but lack clarity on how such systems will work in their markets.

The Asia-Pacific, like the rest of the world, has a growing demand for broadband that satellite operators are eager to tap. SpaceX, OneWeb, Telesat, Amazon and others are competing to cover the globe with fast and abundant broadband via hundreds or thousands of satellites in low Earth orbit.

“We have been approached by several of them,” PSN chief executive Adi Rahman Adiwoso said of megaconstellation companies during an Aug. 17 webinar hosted by the Asia-Pacific Satellite Communications Council. “Every time I ask them what is the real price per megabit, per gigabit, and how much instrumental costs [there are], I have not received any clarity.”

Adiwoso said PSN believes the most cost-effective way to provide high-speed internet from space “is still a very high-throughput satellite GEO system.” The company has one such satellite under construction with Thales Alenia Space, and is preparing a new broadband satellite to replace Nusantara-2, a satellite that was destroyed when its April launch aboard a Chinese Long March 4B rocket ended in failure, he said.

Sky Perfect JSAT invested an undisclosed sum into LeoSat in 2017, a LEO broadband startup that collapsed in 2019 after failing to secure enough funding for its $3 billion network.

“Some special market they will have,” Akao said, also of megaconstellations, “but still I believe that the GEO satellite will be core for us.”

Akao said he considers LEO megaconstellations risky ventures because they will require continual investment in much larger fleets of satellites than GEO networks require, and the user terminals needed to access the service are more complicated — and presumably much more expensive — than the hardware needed for GEO-based internet service.

“We don’t know at this moment how they will be realized,” he said. “We will wait and see.”

Yau Chyong Lim, Measat chief operating officer, said the company is in discussions with a LEO broadband entity about being a distribution partner in Malaysia, but is waiting for pricing information.

“There are still a lot of questions that need to be answered,” he said. “For example, what is the cost per megabit, the ground terminal cost, especially if we were to serve the market segment that we are currently in — the rural areas — how that can be addressed?”

Lim said Measat is focused for now on GEO, having ordered a new satellite from Airbus Defence and Space last year, but remains open to partnering to provide LEO broadband.

“We always remain open on the technology itself if it makes sense for us, so we will work together with the relevant parties to provide the service into Malaysia,” he said, without naming the prospective partner.