As Astra prepares for another launch attempt of its small launch vehicle, the company is facing a lawsuit from another company with a similar name.
SpaceNews 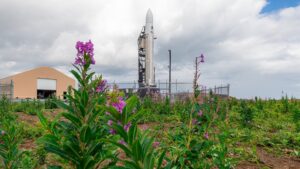 WASHINGTON — As Astra prepares for another launch attempt of its small launch vehicle, the company is facing a lawsuit from another company with a similar name.

Astra announced Aug. 26 that it will make another attempt to launch its Rocket 3.1 vehicle from Pacific Spaceport Complex – Alaska on Kodiak Island on Aug. 30. A launch window opens at 10 p.m. Eastern for two and a half hours, with similar launch opportunities daily through Sept. 3. The company announcement comes after the filing of notices to airmen and mariners closing off airspace around, and waters downrange from, the launch site at those times.

The company attempted to launch from Kodiak during a six-day period that started Aug. 2. Weather postponed launch attempts on three days, while technical and range issues scrubbed launches on the other three days.

The launch is the first of three Astra plans to perform to demonstrate that the vehicle can achieve orbit. In a call with reporters July 30, company executives said it was “pretty unlikely” they could get all the way to orbit on this launch, and instead hope to demonstrate a successful first-stage burn and stage separation.

A version of that vehicle, called Rocket 3.0, attempted to launch from Kodiak in March as part of the DARPA Launch Challenge, a prize competition intended to demonstrate responsive launch capabilities. On the final day of the competition, the company scrubbed the launch less than a minute before liftoff because of what it later described as an “anomalous signal” in vehicle telemetry.

Astra made preparations for another launch later in March from Kodiak, outside of the DARPA competition, but the vehicle was destroyed when a valve failed during a wet dress rehearsal, causing a propellant tank to overpressurize.

Astra emerged from stealth mode in February. The company had gone by “Stealth Space Company” in job listings, although it used the name “Astra Space” in earlier regulatory filings, including license applications with the Federal Aviation Administration and Federal Communications Commission.

The use of the Astra name, though, has prompted a lawsuit by another space industry company with a similar name. Atmospheric and Space Technology Research Associates, or ASTRA, filed suit in U.S. District Court in California Aug. 19, alleging unfair competition and trademark infringement by Astra Space. The suit was first reported by Bloomberg.

ASTRA, based in Colorado, has been in business in 2005, and has several federal trademarks for its name and logo, issued in 2019, covering its work developing satellites and related technologies for atmospheric modeling and space weather. The company recently won awards from the National Oceanic and Atmospheric Administration to study concepts for future weather satellite systems and from the U.S. Space Force for a military weather satellite prototype.

ASTRA argues that the use of a similar name by launch vehicle company Astra Space has caused confusion in the market. In its suit, ASTRA says it has received invoices from several companies that were intended for Astra Space.

It also states that the chief executive of ASTRA, Geoffrey Crowley, received a call from a friend who runs a software engineering company not identified in the suit. That executive asked Crowley why he had not given him advance notice of a visit by his employees. It turns out the visiting employees were from Astra Space, not ASTRA.

The suit claims that Astra Space knew about ASTRA’s trademarks since at least last September, and sought a “Coexistence Agreement” between the two companies so that both could use the Astra name. However, ASTRA alleges that the Astra Space went ahead and emerged from stealth mode earlier this year before any agreement could be finalized. “Defendant’s infringement and unfair competition are therefore intentional, willful, and malicious,” the suit argues.

Federal law allows companies to use similar names if their business activities do not overlap. For example, Delta Air Lines and Delta Faucet Company can use “Delta” in their names since it’s unlikely an individual would confuse a commercial airline with a provider of plumbing fixtures.

There is more of an overlap, though, between ASTRA and Astra Space. In particular, ASTRA’s trademarks include payload services “in the nature of satellite mission management, namely, launching of satellites for others in the fields of aerospace, space weather and atmospheric modeling.”

ASTRA is seeking more than $1 million in damages in the suit. An Astra Space executive did not respond to a request for comment about the lawsuit.