Astra has won a NASA contract to launch a small constellation of Earth science cubesats, while General Atomics selected Rocket Lab for the launch of a small satellite with a NOAA hosted payload.
SpaceNews 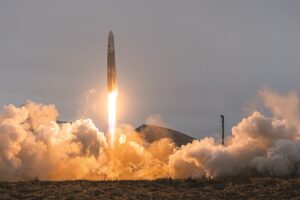 WASHINGTON — Astra has won a NASA contract to launch a small constellation of Earth science cubesats, while General Atomics selected Rocket Lab for the launch of a small satellite with a NOAA hosted payload.

NASA announced Feb. 26 that it awarded a $7.95 million contract to Astra for three launches of the company’s Rocket 3 vehicle, which will be used to deploy the agency’s Time-Resolved Observations of Precipitation Structure and Storm Intensity with a Constellation of SmallSats (TROPICS) mission.

The three launches will take place over a 120-day period between Jan. 8 and July 31, 2022, from Kwajalein Atoll in the Marshall Islands. Those would be the first ground-based orbital launches from Kwajalein since the last Falcon 1 launch, from Omelek Island there, in 2009. Kwajalein has hosted several flights of the air-launched Pegasus rocket, most recently in 2012.

TROPICS is a constellation of six 3U cubesats in three orbital planes at an inclination of 30 degrees and altitude of 600 kilometers. Each identical satellite will carry a radiometer to collect profiles of temperature and water vapor as they pass over tropical weather systems. Scientists will use TROPICS to gain information on the structure of tropical storms, with the constellation allowing frequent revisits to study how those storms evolve.

The TROPICS contract is the second NASA award Astra has received. In December, the company was one of three small launch vehicle developers to win Venture Class Launch Services contracts for launches of cubesats. Astra’s award, valued at $3.9 million, is for the dedicated launch of 30 kilograms of cubesats to a 500-kilometer mid-inclination orbit, no later than June 2022.

General Atomics announced Feb. 24 that it selected Rocket Lab to launch an Orbital Test Bed satellite it developed carrying the Argos-4 Advanced Data Collection System (A-DCS) hosted payload. NOAA arranged for the launch of the payload through the Hosted Payload Solutions contract vehicle run by the Space Force’s Space and Missile Systems Center. The launch, on an Electron rocket, is scheduled for late 2021 or early 2022.

The A-DCS payload is part of the Argos data collection system that includes NOAA, the French space agency CNES, Eumetsat and the Indian space agency ISRO. The payload receives data from sensors, ranging from those mounted on ocean buoys to wildlife trackers, and relays that data to ground stations.

The contract is the second in as many weeks awarded by General Atomics for the launch of an Orbital Test Bed satellite. The company selected Firefly Aerospace Feb. 18 to launch a satellite carrying the Multi-Angle Imager for Aerosols hosted payload, a NASA Earth sciences instrument. That satellite will launch into polar orbit on an Alpha rocket from Vandenberg Air Force Base in California in 2022.