Small launch vehicle developer Astra will go public by merging with a special-purpose acquisition company (SPAC), providing the company with nearly $500 million in cash and valuing it at more than $2 billion.
SpaceNews 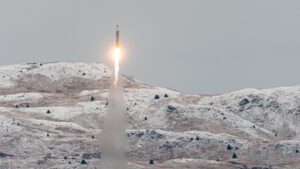 WASHINGTON — Small launch vehicle developer Astra will go public by merging with a special-purpose acquisition company (SPAC), providing the company with nearly $500 million in cash and valuing it at more than $2 billion.

Astra announced Feb. 2 an agreement to merge with Holicity, a SPAC established last year by Craig McCaw. That merger, expected to close in the second quarter, will turn Astra into a publicly traded company on the Nasdaq exchange with the ticker symbol ASTR. McCaw, chairman and chief executive of Holicity, will join Astra’s board as part of the deal.

Astra expects to raise $489 million through the merger with Holicity, a total that includes a $200 million private investment in public equity (PIPE) led by BlackRock and $30 million from a concurrent Series C round, company executives said in an investor call. The deal will value Astra at $2.1 billion.

That investment will go toward completing its manufacturing facilities and investing in automated production capabilities to allow the company to dramatically increase its launch date. In an investor presentation filed with the Securities and Exchange Commission, the company projects launching 300 times in 2025, a total nearly three times the number of orbital launches performed worldwide in 2020.

“We plan to deploy the proceeds of this transaction to accelerate our growth and operation to meet the demands of our customers and to fully support our capital needs as we continue to ramp,” Kelyn Brannon, chief financial officer of Astra, said on the investor call. She added that the deal will “fully fund” Astra to profitability, which the company projects achieving in 2024.

Those projections call for Astra’s revenue to increase from $4 million in 2021 to $1.5 billion in 2025. That revenue would come primarily from the company’s launch business, but with growth from a new line of “modular spacecraft platforms” designed for launch on Astra’s rockets and carrying payloads provided by customers. That is similar to another small launch vehicle company, Rocket Lab, which has created a Photon satellite bus for launch on its Electron rockets.

“We see an opportunity to design spacecraft that perfectly integrate with our launch system and allow us to take our customers from concept to constellation in months instead of years,” Chris Kemp, chief executive of Astra, said on the call. “This allows us to address a larger market faster, which is key to a vertically integrated platform.”

The near-term focus is on the launch business, though. Astra noted in the call it is the third private company to have demonstrated an “orbital launch capability,” although the company has yet to place a payload in orbit. Its second orbital test launch, in December, nearly reached orbit, falling short when the second stage ran out of propellant early. The company hasn’t announced plans for its next launch, but said it expects to enter commercial service in the middle of this year.

Kemp said Astra has its first 50 launches under contract, but did not disclose specific customers beyond a NASA Venture Class Launch Services contract awarded in December. Those customers, which he said include companies and government agencies, are “all currently in orbital operations.” The company has a backlog of more than $150 million in launch contracts.

Astra’s promise of frequent, inexpensive launch attracted McCaw, who sees it as an enabler of many companies proposing smallsat constellations. “The missing element has been small launch, simple launch, cheap launch, that is available on literally a day’s notice,” he said on the call. “Astra is ruthlessly simple in its philosophy, to do this with a satellite launch capability that fulfills the needs of those entrepreneurs with the speed and opportunity they want.”

McCaw, who made a fortune in the cellular industry, is best known in the space field for a failed venture. He was co-founder of Teledesic, a company founded in the 1990s to launch a constellation of satellites to provide broadband communications similar to current projects like SpaceX’s Starlink and Amazon’s Project Kuiper. The company went out of business in the early 2000s, having launched only a technology demonstration satellite.

He alluded to Teledesic in the call. “I’ve long believed that there’s been an amazing opportunity to provide communications satellites, essentially an internet in the sky,” he said. “We see all of that happening now with the Starlink and Kuiper constellations coming with thousands of satellites.”

Astra is the latest space company to go public by merging with a SPAC, also known as “blank check” companies that raise money by going public and then merge with privately held companies, an alternative to traditional initial public offerings. Virgin Galactic went public in 2019 by merging with Social Capital Hedosophia. Satellite constellation company AST&Science and in-space transportation company Momentus also announced plans late last year to merge with SPACs, but neither deal has yet closed.