Chinese automaker Geely has got the green light to begin manufacturing satellites for navigation, connectivity and communications needed for self-driving cars.
SpaceNews 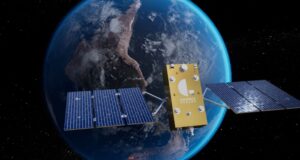 HELSINKI — Chinese private automaker Geely has got the green light to begin manufacturing satellites for navigation, connectivity and communications needed for self-driving cars.

China’s National Development and Reform Commission (NDRC) approved a license for a new facility Taizhou, Zhejiang province, in which Geely is based, to begin manufacturing earlier in February.

Geely announced plans for the $326 million Taizhou project in March last year and now plans to begin production in October. The facility will have an estimated production output of over 500 satellites per year, according to a press release.

Geely has not released a figure for the total planned number of satellites it aims to launch, but the production capacity suggests thousands. Geely says the constellation will not need costly base stations to realise self-driving.

Geely is planning to launch two demonstration satellites in the first half of this year with the goal of testing navigation enhancement. While GPS, Beidou and other GNSS satellite systems provide positioning accuracy to the level of meters, navigation enhancement to the centimeter level is required for driverless vehicles.

The pair of 130-kilogram satellites were understood to have been transported to the Jiuquan Satellite Launch Center in June 2020. It is possible launch has been delayed by launch failures of commercial Kuaizhou rockets shortly after.

Geely has recently been branching out into trucking, rail, drones and developing deeper cooperation with Volvo while also looking towards low Earth orbit.

Geely’s move follows a number of government decisions going back to late 2014 to allow private capital into the formerly closed-off space sector.

Hundreds of firms focusing on launch vehicles, satellite manufacture, ground stations and downstream applications have since sprung up.

China’s Geely Technology Group states it saw the NDRC decision to add “satellite internet” to a list of “new infrastructures” in April 2020 as an opportunity to establish an industrial chain including research and development, design, manufacturing, launch and market application for its own satellite network.

Xu Zhihao, CEO of Geely Technology Group, said that satellite manufacturing is crucial for the entire satellite industry chain and the Taizhou facility will meet the development needs of this rapidly developing industry, including shortening development cycles of micro-satellites, faster technology updates, and more functionality.

Geely’s plans could provide lucrative opportunities for emerging commercial launch providers if they can get to the pad and prove reliability, boosting Chinese government objectives of creating a commercial space ecosystem and new supply chains.

These variously aim at providing coverage in remote areas, maritime and aviation connectivity, and Internet and Things and backhauling services.

Additionally a spectrum application has been filed with the International Telecommunication Union (ITU) for a constellation named “GW”. The mystery constellation would consist of nearly 13,000 satellites and is understood to have state-owned satellite and telecommunications entities as the planned operators. Galaxy Space, a private company, also plans a 5G LEO constellation.