The head of Italian rocket manufacturer Avio assured customers Nov. 19 that the company was working hard to return Vega to service following the rocket’s second failure in its last three launches.
SpaceNews 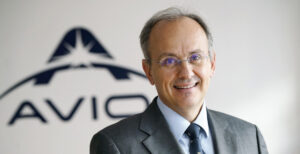 VALLETTA, Malta — The head of Italian rocket manufacturer Avio assured customers Nov. 19 that the company was working hard to return Vega to service following the rocket’s second failure in its last three launches.

In a video statement, Avio CEO Giulio Ranzo said that in initial investigation into Vega’s Nov. 16 failure had identified an issue with the integration of the electromechanical actuation system of the fourth stage nozzle. Arianespace, which markets and operates the Vega rocket, said earlier this week that telemetry and production documentation point to the incorrect installation of cables in the rocket’s thrust vector control system.

Ranzo assured customers and investors that Vega would be returned to service rapidly.

“What I can say about this event is that it is a very unfortunate one, for which I take the opportunity to express my deepest apologies to the customers,” said Ranzo. “But one that we believe to be in a position to constrain, identify and fix quite rapidly. We will work in the next few weeks very intensively in order to restore the credibility of the launcher as soon as we can.”

Introduced in 2012, Vega flew 14 consecutive successful missions prior to its first failure in July 2019 while carrying an imaging satellite for the United Arab Emirates. That failure was blamed on structural failure in the rocket’s solid-fuel second stage. Vega successfully returned to flight Sept. 2, carrying 53 smallsats on a dedicated rideshare mission.

The 750-kilogram SEOSAT-Ingenio, billed as Spain’s first Earth observation satellite, was built by Airbus Defence and Space to provide wide-field imagery for civil applications. The 175-kilogram TARANIS, or Tool for the Analysis of RAdiation from lightNIng and Sprites, was built by the French space agency CNES to study electromagnetic phenomena in the upper atmosphere created by thunderstorms.

SEOSAT-Ingenio was funded by Spain’s Centre for the Development of Industrial Technology (CDTI) and managed by the European Space Agency as a third-party mission, a designation given to national missions managed by ESA. The 750-kilogram Earth observation satellite carried an optical payload with a 2.5-meter resolution and was intended to serve a wide variety of civil applications including cartography, urban development and water management.

CDTI officials said that although losing SEOSAT-Ingenio is disappointing, the satellite project accomplished economic development goals well before its ill-fated launch. The SEOSAT-Ingenio program has served as a catalyst for Spain’s space industry, which last week secured its first lead role on a Copernicus mission with the awarding of a €380 million prime contract to Madrid-based Airbus Defense and Space Spain for the Land Surface Temperature Monitoring (LSTM) mission. LSTM is only the third ESA mission to be led by Airbus in Madrid after SEOSAT-Ingenio and the Cheops space telescope that launched last December.

As SEOSat-Ingenio was expected to be Spain’s first Earth observation satellite offering a dedicated resource to the country, the need still exists. However, according to Dominique Gillieron, ESA Earth Explorers program manager, obsolescence and a lack of spare flight hardware would make building a copy of the satellite difficult. Gillieron said that ESA is working with Spain to explore potential substitutes for the functionality of SEOSat-Ingenio.

CNES said Nov. 20 that it intends to build a second TARANIS  satellite and has formed a task force that has until late January to develop a proposal for a TARANIS 2 mission.

The task force, CNES said in a statement, “will define a mission matching the science goals of Taranis while seeking to cut costs and lead times, and will present its consolidated findings to the CNES Executive Committee end January 2021 after a status report in mid-December 2020.”

Prior to the failure, the next mission on Vega’s manifest was an early 2021 mission carrying the Pléiades-Neo 1 imaging satellite and a set of smallsat secondary payloads, including the Norwegian Space Agency’s NorSat-3 ship-detecting microsatellite and Eutelsat’s ELO Alpha cubesat.

Eutelsat declined to comment on Vega’s failure but said any delay in the launch of ELO Alpha would not affect the company’s planned 25-satellite Eutelsat LEO for Objects constellation. “Our ELO 1 satellite, scheduled for launch aboard a Falcon 9 rocket, will have similar testing capabilities as ELO Alpha, maintaining our overall schedule for the ELO project” said Eutelsat spokeswoman Jessica Whyte. ELO is intended to serve the so-called Internet of Things market by providing low-data-rate connectivity to remote devices.

Jon Harr, the Norwegian Space Agency’s director of enterprise development and national space infrastructure, told SpaceNews he is confident Vega will be returned to flight with minimal delay. He said it wouldn’t be necessary to consider another launch opportunity for NorSat-3 unless Vega was grounded for six months to a year.

Pléiades-Neo 1 is one of two Pléiades-Neo satellites Airbus plans to launch on Vega rockets in the first half of 2021. Airbus plans to complete the four-satellite optical Earth observation constellation in 2022 by launching Pléiades-Neo 3 and 4 on a single Vega C, Avio’s next-generation launcher. Vega C had been scheduled to debut this year but Avio said in September that it was delaying the rocket’s maiden flight to mid-2021 so that it could catch up on Vega missions delayed by last year’s failure.

Vega spent 14 months out of service following its July 2019 failure. Its September return to flight followed months of additional delay due to this spring’s temporary closure of the Kourou spaceport and a run of bad weather.