Axiom Space announced Feb. 16 it has raised $130 million from a group of investors, allowing the company to push ahead with its long-term ambitions of establishing a private space station.
SpaceNews 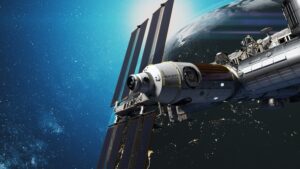 WASHINGTON — Axiom Space announced Feb. 16 it has raised $130 million from a group of investors, allowing the company to push ahead with its long-term ambitions of establishing a private space station.

The Series B round was led by C5 Capital, a firm that invests in cybersecurity and “closely aligned” sectors, including space. Others participating in the round include TQS Advisors, Declaration Partners, Moelis Dynasty Investments, Washington University in St. Louis, The Venture Collective, Aidenlair Capital, Hemisphere Ventures and Starbridge Venture Capital.

The funding will allow the company to expand, including doubling its current workforce of about 110 people this year, Michael Suffredini, president and chief executive of Axiom, said in an interview. It will also support quarterly payments to Thales Alenia Space, which is building the pressurized elements of the first modules. The company recently moved into a two-story building in Houston and is buying a new test facility, with plans to establish a campus at Spaceport Houston, also known as Ellington Airport.

“This is a really the major step for us,” he said. “The B round is typically where you get your first large investment, but more importantly than the money is the community of investors that you put together, so that future rounds are largely from those investors.”

That group of investors, he said, was “a perfect fit for us and puts us in a good position, however we want to go forward.”

As part of the deal, Rob Meyerson, an operating partner at C5 and former longtime president of Blue Origin, will join Axiom’s board. “Axiom Space is a force in the space sector, and it will become a centerpiece of the C5 Capital portfolio and enhance our vision for a secure global future,” Meyerson said in a statement about the investment round.

“It’s fantastic that Rob Meyerson is part of C5,” Suffredini said. “He’s got this huge amount of experience. We’re excited to have him on the board.”

While the funding round advances Axiom’s plans to place a series of commercial modules on the International Space Station starting in 2024, which will ultimately form the core of a standalone commercial station, Suffredini acknowledged the company will need to raise more money.

“It’s probably between half a billion and a billion dollars that ultimately we’ll raise to build our space station,” he said. That project will have an overall cost of about $3 billion, but most of that will come from revenue from operations.

The next funding round will come as soon as this fall, he said. That could be another private round or by going public. If the latter, that would likely be done through a merger with a special-purpose acquisition company (SPAC), an approach used by a growing number of space companies, including Virgin Galactic and Astra.

The demand for those commercial modules and, eventually, standalone space station will change over time. Initially, demand will come in large part from flying private and professional astronauts, with research playing a smaller role. “I think the future is manufacturing in space,” Suffredini said. “About 15 years from now, that’s going to eclipse all the other markets by far.”

The statement about the funding round hinted at other applications of the modules. “Axiom Station will play an important role in future missions critical to preserving our national security and fighting climate change,” said Mike Mullen, a retired admiral and former chairman of the Joint Chiefs of Staff who is now a partner at C5 Capital.

Suffredini confirmed that national security applications could be a future market for Axiom’s station. “It’s our belief that humans in space and support of that is going to be necessary” for the new U.S. Space Force, he said, although the Space Force has not announced any plans to deploy personnel in space for the foreseeable future.

The Axiom facility, he said, could host payloads for Earth observation and monitoring climate change. The ISS currently is used for some Earth science experiments.

Axiom’s near-term plans involve flying people to the ISS on commercial crew spacecraft, starting with the Ax-1 mission in early 2022, whose crew the company announced Jan. 26. Preparations for that mission are going well, Suffredini said, although training won’t begin in earnest for a few months.

“We have quite a few in the hopper,” Suffredini said of future missions. Axiom has signed one customer for its second flight and working on signing the other two, and has identified the commander for that mission. A third mission is fully booked, while at least one customer is in the process of signing up for a fourth mission.

Axiom has about a dozen prospective customers that it’s in discussions with. “Out of a dozen maybe three will ultimately fly, maybe four,” he said. “It just takes time. In a lot of cases they just have to think about it a lot. It’s a big thing to fly to space.”

Those missions would fly through 2023 at about two per year, pending approvals from NASA. “We have to come in and make our case for our flights,” he said. “The most important thing is to get your customers signed.”