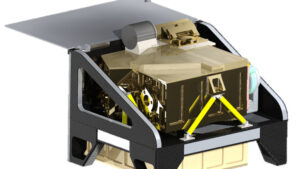 The company is drawing on experience gained building the Atmospheric Infrared Sounder (AIRS) instrument to develop miniature sensors with applications for weather and climate monitoring.

In a six-month $376,000 study completed in October for the National Oceanic and Atmospheric Administration, BAE Systems explored the idea of mounting infrared sensors on microsatellites to gather weather data in the troposphere and stratosphere.

BAE Systems’ proposes a two-instrument suite. Each satellite in a weather constellation would include the Midwave Infrared Sounding of Temperature and Humidity in a Constellation for Winds, called Mistic Winds, to observe atmospheric temperature and water vapor. BAE Systems developed Mistic Winds with a grant from NASA’s Instrument Incubator Program and the company’s internal research and development funding.

In addition, some or all of the satellites would include a second sensor called Longwave Sounding Spectrometer for Temperature and humidity in a Constellation (LlSTiC) to gather vertical temperature profiles in the stratosphere.

“What we really would like to do is help the country obtain better weather forecasting with innovative hyperspectral instruments that observe more than a thousand different wavelengths to characterize the atmosphere,” Lawrence Schaefer, BAE Systems program director for space systems advanced development, told SpaceNews.

In contrast to AIRS, a 156-kilogram sensor launched in 2002 on NASA’s Aqua Earth-observation satellite, Mistic Winds weighs about 15 kilograms.

“We found out that by going after the right wavelengths to focus on the troposphere and using modern spectrometer design and technology, we were able to miniaturize the instrument and make something that’s about one tenth the mass and one sixtieth the volume,” Schaefer said. “It allows us to have high-quality sounding using a low Earth orbiting constellation that is 50 times closer to the atmosphere than a satellite in geostationary orbit.”

LlSTiC is slightly larger than Mistic Winds, weighing about 20 kilograms.

“One instrument would do fine on a microsatellite,” Schaefer said. “Two would be hosted on a larger, but still small, microsatellite.”