In recent commercial space acquisitions, founders largely have remained with the businesses they established or moved on to form new space companies. Two exceptions are Roccor co-founder Doug Campbell and Scott Larson, who co-founded UrtheCast and Helios Wire.
SpaceNews 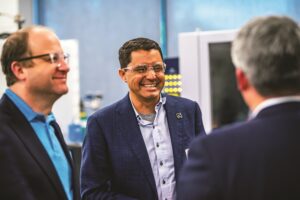 In recent commercial space acquisitions, founders largely have remained with the businesses they established or moved on to form new space companies. Two exceptions are Roccor co-founder Doug Campbell and Scott Larson, who co-founded UrtheCast and Helios Wire. Both men left the space sector entirely after their startups were acquired.

Campbell, in fact, was the only Roccor executive to leave when the Longmont, Colorado company was purchased in October by Redwire, a venture established in June to roll up a number of smaller space companies. Campbell, who served as Roccor CEO until 2018, now works full time as CEO for Solid Power, a firm he founded in 2012 to develop solid-state rechargeable batteries primarily for automotive applications.

“Redwire wanted to preserve the existing executive management team,” Campbell said. “I was just the board chairman. They didn’t need me anymore.”

If Redwire executives had approached Roccor with an offer to buy the company and replace its entire executive management team, “I don’t think we would have pursued that,” Campbell said.

Instead, Redwire proposed buying Roccor and allowing the firm to continue to operate, while Redwire executives explored opportunities to bolster Roccor’s business by leveraging products and services from the firm’s other portfolio companies. That made the proposal appealing, Campbell said.

Larson is less wedded to the businesses he helps establish. Larson co-founded Helios Wire in 2016 shortly after stepping down as CEO of UrtheCast, a company he founded in 2010 with his brother Wade Larson.

“From my personal standpoint, it’s always about creating value in the near term or the long term,” Larson said.

UrtheCast stock traded publicly on the Toronto stock exchange between 2013, when it went public through a special purpose acquisition company, and 2020, when UrtheCast filed for protection from creditors to avoid bankruptcy.

Helios Wire was an internet-of-things startup whose claim to fame was priority mobile satellite system S-band spectrum. Helios Wire planned to use that spectrum to help customers track and communicate with billions of devices worldwide.

“We had a choice: to stick with it and keep moving along the business plan or sell and give the return to the shareholders,” Larson said. “The shareholders made the decision to sell Helios Wire to EchoStar and they were thrilled with it.”

Although Roccor’s exit turned out well for Campbell, he’s not tempted to establish another space startup.

“Roccor took advantage of the fact that there was not an incumbent supplier base for small satellite constellations,” Campbell said. “There was no Boeing or Lockheed Martin or equivalent in that medium place between big geostationary satellites and little cubesats.”

“Make sure you’ve got a strong competitive edge,” Campbell said. Without an attention-grabbing product, attracting customers takes a long time in the space industry, he said.

The lengthy timelines also help explain the relative dearth of space industry exits. Earth observation and communications companies seeking to establish their own constellations can devote many years to the task of developing, manufacturing and launching multiple satellites.

Even geospatial data analytics firms are not likely to be purchased or to become publicly traded until they garner significant revenue, which takes time because customers still are identifying promising applications for the products, Larson said.

“Irrespective of some of the buzz, the hype, the excitement that comes along with space, it’s still a relatively new industry,” Larson said. “From the NewSpace side, it might be 10 years old. UrtheCast was one of the original ones along with Planet Labs and Skybox Imaging.”

(Google purchased Skybox Imaging in 2014, renamed it Terra Bella and sold it to Planet in 2017.)

Another obstacle to speedy exits is cash. It takes significant capital to build a space business.

“Companies that are building hardware to generate data from space live in a tough world,” said Andrew Aldrin, director of the Aldrin Space Institute and the International Space University Center for Space Entrepreneurship at Florida Institute of Technology. “It still takes a long time, there’s a lot of technical risk and frankly the margins on the hardware side of the business aren’t all that great.”

Firms developing space-related software and applications tend to offer more rapid returns for investors, Aldrin said. “The information side of the business looks a lot more like a business you expect to see in Silicon Valley,” he added.

For Aldrin, that dichotomy raises concern that investors will shun hardware startups in favor of more software-centric space companies.

Since space investments may not produce profits on the timelines needed to attract venture capital, “we need to find more patient capital for the hardware side,” Aldrin said.

Fortunately, patient capital is beginning to flow into the industry. Aldrin points to Voyager Space Holdings, the Denver firm established in 2019 by space angel investor Dylan Taylor to make long-term investments in the space sector.

This article originally appeared in the Dec. 14, 2020 issue of SpaceNews magazine.