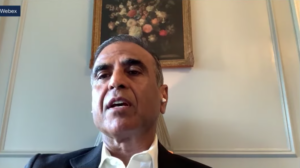 Correction: An earlier version of this story  incorrectly stated that Bharti Enterprises is currently demonstrating connections between OneWeb satellites and BMW cars with less than 32 milliseconds of signal lag. OneWeb spokeswoman Katie Dowd said Aug. 21 that OneWeb’s demonstration with BMW concluded in the spring. The tests did not involve automobiles, and achieved 35-45 milliseconds of signal lag.

Sunil Mittal, the billionaire chairman of Bharti Enterprises, said during an Aug. 20 webinar hosted by the Indian Space Research Organisation (ISRO) that OneWeb should start providing broadband early in 2022 from a constellation of low-Earth-orbit satellites, and that plans are underway to build two or three gateway stations in India for domestic services.

“OneWeb is going to be the world’s first LEO satellite constellation flying about 648 satellites at 1,200 kilometers, covering every inch of the globe,” Mittal said.

Bharti Enterprises and the British government are buying OneWeb, pledging in July to each invest $500 million to revive the bankrupt venture. However, neither Bharti nor the British government previously indicated that the constellation would have the same number of satellites OneWeb planned before entering Chapter 11 bankruptcy protection in March.

OneWeb has 74 satellites in orbit, and will need many more launches plus the rollout of several ground stations before it can provide global service. Prior to filing for bankruptcy, OneWeb was targeting global service in 2021.

Mittal didn’t say when launches would resume, but said the plan is for OneWeb to “start to deliver these services in the early part of ‘22 once the constellation is going to be up.”

With that coverage, “we will have started to test a lot of ground and user terminals,” Mittal said. “It is here we would like to see ISRO’s hand and support in work to develop user terminals which cater to the needs of Indian requirements.”

The nonexistence of affordable user terminals for high-speed consumer broadband from LEO satellites is a significant concern for OneWeb and the satellite industry. Current user terminals that can work with LEO broadband satellites are either based on flat, phased-array antennas or mechanical tracking antennas with two dishes — both expensive approaches.

Antenna challenges notwithstanding, Mittal said Bharti Enterprises has “already earmarked a lot of areas in India where the benefits of this LEO constellation broadband connectivity will be made available.”

“We will also seek to build a very strong cooperation agreement with ISRO to see the combination of a GEO-LEO constellation for Indian territory is put to use where we can combine the strength and capacity requirements of the nation,” he added.