President-elect Joe Biden announced his pick to be the next secretary of defense is retired Army four-star general Lloyd Austin.
SpaceNews 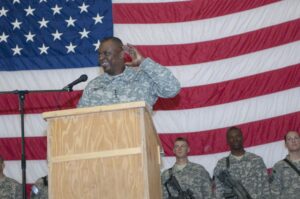 WASHINGTON — President-elect Joe Biden on Wednesday will formally introduce his pick to be the next secretary of defense — retired U.S. Army four-star general Lloyd Austin.

Biden and Vice President-elect Kamala Harris will introduce Austin at an event in Wilmington, Delaware. If confirmed by the Senate, Austin will be the 28th U.S. secretary of defense and the first African-American to serve in that role.

“Austin is a trusted, trailblazing leader who brings deep experience serving as a top military commander and in critical Pentagon roles,” Biden said Dec. 8 in a statement.

Biden said Austin, if confirmed, will have to take on major challenges such as the logistics associated with COVID-19 vaccine distribution, restoring America’s alliances, supporting and equipping service members and caring for them and their families, addressing the threat posed by the climate crisis, modernizing America’s armed forces and preparing for the conflicts of the future.

Austin’s pick has drawn opposition from some lawmakers and progressive groups who want to see a civilian running the Pentagon rather than a recently retired general. Austin retired from active duty in 2016. For his nomination to move forward, Congress will have waive a legal requirement that a military official has to be retired at least seven years before he or she can serve as defense secretary.

But Smith said he is concerned about “again appointing a recently retired general to be secretary of defense.” Trump’s first Pentagon chief Jim Mattis also had retired from the military a few years before being nominated.

“Austin should meet with the members of the House Armed Services Committee so they can ask questions about civilian control of the military,” Smith said.

Sen. Jack Reed (D-RI), the top Democrat on the Senate Armed Services Committee, said the Senate has to “thoroughly review this nomination in the historic context it is being presented and the impact it will have on future generations.”