President Joe Biden issued a national security blueprint that lays out broad goals and priorities for his administration.
SpaceNews 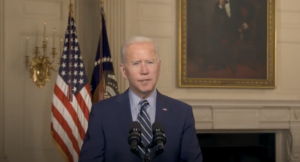 WASHINGTON — President Joe Biden issued a national security blueprint that lays out broad goals and priorities for his administration and identifies China as the United States’ primary competitor.

With regard to space, the Interim National Security Strategic Guidance released March 3 says the United States will “explore and use” outer space but also ensure space remains safe and stable.

The guidance is to help agencies plan budgets and strategies while the administration continues to work on a more detailed National Security Strategy. One of the key themes is that the United States has to engage with the world. “Diplomacy is back. Alliances are back,” Biden says in the document.

The United States has to take a leadership role “in promoting shared norms and forge new agreements on emerging technologies, space, cyberspace, health and biological threats, climate and the environment, and human rights,” says the guidance.

The Defense Department will have to set “clear priorities” in its budget, Biden says. DoD will need to realign resources in order to deal with an “increasingly assertive China and destabilizing Russia.”

The administration will work with Congress to shift spending “from unneeded legacy platforms and weapons systems” to cutting-edge technologies and capabilities, says the document.

Biden also calls on DoD to “streamline the processes for developing, testing, acquiring, deploying and securing these technologies.”

Other highlights from the document: