A bipartisan group of House members have formed a Space Force Caucus to advocate on behalf of the military’s newest service.
SpaceNews 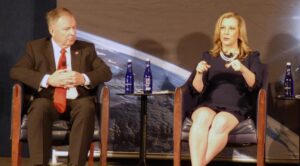 WASHINGTON — The U.S. Space Force got a political boost Oct. 20 with the announcement that a bipartisan group of House members formed a Space Force Caucus to advocate on behalf of the military’s newest service.

“This caucus will serve as the chief advocate for our nation’s exciting new service, and work closely with the Department of the Air Force and the Space Force to provide opportunities for members and their staff to learn about the vital role the U.S. Space Force plays in maintaining American space power,” Lamborn said in a statement.

“Maintaining superiority in space is essential to protecting our national security and U.S. interests around the world,” Horn said. “I look forward to working with the Air Force and Space Force leadership and my co-chairs to advocate for the importance of space priorities and the needs of our Space Force professionals.”

Lamborn and Rep. Adam Schiff (D-Calif.) in 2015 formed the House Space Power Caucus to educate members on the role of space in national security.