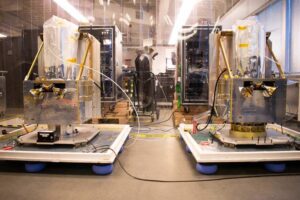 WASHINGTON — BlackSky, a provider of geospatial intelligence, announced Sept. 24 it will add new satellites to its network that will provide high-resolution and nighttime imagery.

The U.S. Army will be one of the users of Gen-3 satellites, O’Toole said. BlackSky in January received a contract to prototype the service from the Defense Innovation Unit, the Pentagon’s outreach organization that works with commercial tech industries.

Under the Army’s “tactical geoint” program, military users will be able to task a Gen-3 satellite. “They will own the satellite, and we will help them operate it,” O’Toole said. The Army can downlink imagery to its existing remote ground terminals. Under the contract, BlackSky will provide analytics services using artificial intelligence and machine learning algorithms.

O’Toole said this program is an example of how the military “benefits from commercial investments to accelerate the access to this type of capability.”

The Gen-3 satellites will have dual optical-infrared sensor payloads that can see at nighttime, in low light conditions and in bad weather.

The Gen-3 design is a larger modified version of the 50-kilogram Gen-2 satellites produced by BlackSky’s sister company LeoStella, based in Seattle, Washington.

BlackSky currently has six Gen-2 satellites on orbit. O’Toole said the plan is to deploy 16 of the current version and to replace them with Gen-3 when they begin to age out.