Orbion is a four-year-old startup in Houghton, Michigan, that specializes in Hall-effect plasma thrusters for small satellites.
SpaceNews 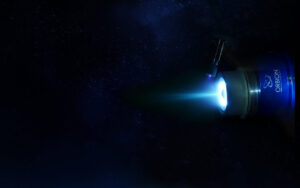 Blue Canyon is producing four satellites for the Defense Advanced Research Projects Agency’s Blackjack program. DARPA plans to launch as many as 20 small satellites to demonstrate that a mesh network in low Earth orbit can meet military requirements at lower cost and shorter design cycles than traditional Pentagon programs.

DARPA in October 2018 selected Colorado-based Blue Canyon as one of the satellite bus suppliers for Blackjack. The agency in June 2020 awarded the company a $14.1 million contract to manufacture four satellites, with options worth $99 million for up to 20 satellites.

Orbion is a four-year-old startup in Houghton, Michigan, that specializes in Hall-effect plasma thrusters for small satellites.

William Schum, program manager at Blue Canyon, told SpaceNews the company looked at electric propulsion systems from several vendors and chose Orbion’s because it offered the most reliable solution for the price. “It was definitely competitive and it was a tough competition,” said Schum. “At the end of the day what carries the most weight is the technical risk, and their solution showed the least technical risk amongst the competitors.”

Blackjack is leading the way in the military’s deployment of a proliferated electric propulsion architecture, King told SpaceNews. “This is the first time our government needs a relatively large number of sophisticated smallsat electric propulsion systems.”

Orbion has other customers for its Aurora plasma thrusters but the only one that King would disclose is AST & Science, a company in Texas developed a LEO constellation to provide 4G and 5G cellular coverage.