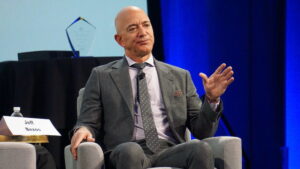 Blue Origin posted a job opening Sept. 18 for am “Orbital Habitat Formulation Lead” at its headquarters in the Seattle suburb of Kent, Washington. That individual will be charged with leading the company’s development of commercial space stations in low Earth orbit as a new product line.

“To develop Blue Origin’s vision of millions of people living and working in space, humanity will require places for them to live and work: space destination systems in which value-creating economic activity can occur,” the company states in the job description. “LEO (low Earth orbit) habitable stations, learning from but going beyond the ISS (International Space Station), are a first step.”

The job entails leading technical and business aspects of commercial space station development, including identifying customers and partners. It would also include “potential acquisitions” to support that effort.

“Partnering with business development professionals, you will develop a detailed understanding of NASA, other government, and commercial needs and guide the iterative development of product strategy,” the job description states. “You will be accountable for capturing external and internal sponsorship funding to establish viable LEO destination systems in the 2020s.”

The description places a particular emphasis on NASA as a potential user, and funder, of the effort. “Tap your extensive NASA network (especially HQ, JSC, MSFC, and KSC) to shape and accelerate the acquisition strategy for LEO destination systems,” it states, referring to NASA Headquarters and the Johnson Space Center, Marshall Space Flight Center and Kennedy Space Center, the three NASA field centers most closely associated with human spaceflight. “Understand their needs and how they can evolve.”

In its LEO commercialization strategy announced last year, NASA said it would support development of both commercial modules installed on the ISS as well as “free-flyer” space stations operating independently of the ISS. In January it selected Axiom Space to access an ISS port, which the company will use for a series of commercial modules that it will launch starting in 2024 as a precursor to an eventual independent space station.

However, NASA paused a separate solicitation for supporting a free-flyer station. At a session of the ISS Research and Development Conference Aug. 27, agency officials said they were still interested in pursuing that solicitation but did not give a schedule for doing so, which may explain the language in the Blue Origin job description “to shape and accelerate the acquisition strategy for LEO destination systems.”

“I can’t promise any specific timelines associated with that, but we are definitely working on the free flyer and intend to release a solicitation soon on that once we get our strategy all agreed to internally,” Phil McAlister, director of commercial spaceflight programs at NASA, said at the conference.

Other companies will likely be interested in that free-flyer solicitation once released. Nanoracks has proposed commercial space stations called Outposts that could be created by refurbishing upper stages, left in orbit after launches, into modules. Bigelow Aerospace has long proposed developing commercial space stations using expandable, or inflatable, modules, but the company furloughed all its employees in March, citing the pandemic, and has not provided updates since then about its plans.

Blue Origin has not publicly discussed work on LEO space stations in the past, but as the job description notes, it does fit into the strategy the company, and its billionaire founder Jeff Bezos, have often espoused about enabling millions of people to live and work in space. Bezos, in past appearances, has shown images of giant space settlements, modeled on the space colonies proposed by the late Gerard K. O’Neill a half-century ago.

Bezos has also discussed on many occasions using Blue Origin to establish the infrastructure to enable new commercial activity in space. That has included its work on launch vehicles and, more recently, lunar landers. Commercial space stations could be seen as another form of space infrastructure.

Blue Origin separately announced Sept. 22 plans to conduct another test flight of its New Shepard suborbital vehicle. The vehicle is scheduled to lift off from the company’s West Texas test site at 11 a.m. Eastern Sept. 24.

That mission, designated NS-13, will carry a dozen science and technology demonstration payloads, including one from NASA to test precision landing technologies that could be used on future lunar landers. That Deorbit, Descent, and Landing Sensor Demonstration is the first to be mounted on the exterior of New Shepard, rather than carried inside the vehicle’s crew module.

The uncrewed flight will be the seventh consecutive flight of this particular vehicle, but the first since December 2019. Company officials said early this year they expected to perform a few more uncrewed test flights before starting to fly people, but the company has not provided updates since then on its commercial human spaceflight plans, including when it plans to start selling seats and at what price.