Blue Origin has achieved a new milestone in the development of the engine that will power the lunar lander it seeks to provide for NASA’s Artemis program.
SpaceNews 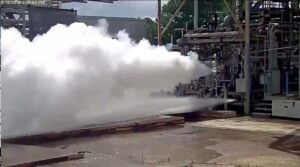 WASHINGTON — Blue Origin has achieved a new milestone in the development of the engine that will power the lunar lander it seeks to provide for NASA’s Artemis program.

“This thrust chamber test measured the ability to extract energy out of the hydrogen- and oxygen-cooled combustor segments that power the engine’s turbopumps, the key to achieving high engine performance,” said John Vilja, senior vice president of engines at Blue Origin, in a company statement.

Blue Origin announced the BE-7 engine in May 2019 when it unveiled its Blue Moon lunar lander. That lander is part of the “National Team” led by Blue Origin that also includes Draper, Lockheed Martin and Northrop Grumman. It won one of the three NASA Human Landing System (HLS) awards in April to begin work on landers for the Artemis program.

The company started testing the BE-7 in June 2019 at NASA Marshall, and has accumulated 1,245 seconds of runtime to date. The engine, which uses liquid hydrogen and liquid oxygen propellants, can produce up to 10,000 pounds-force of thrust, and can be throttled down to as little as 2,000 pounds-force. The company chose those propellants in part because they can eventually be produced from ice deposits believed to exist in the polar regions of the moon.

For the HLS program, the BE-7 will be used on the descent stage developed by Blue Origin and derived from its Blue Moon concept. It will also power the transfer element, led by Northrop Grumman and based on its Cygnus spacecraft, which will move the lander from a highly elliptical near-rectilinear halo orbit around the moon to a low lunar orbit.

“The BE-7, a turbomachinery-based engine using the most efficient propellants, is optimal for deep-space maneuvers and landing on the moon,” Brent Sherwood, vice president of advanced development programs at Blue Origin, said in the company statement. “Our engine test series is steadily maturing what’s needed to get Americans safely on the lunar surface as soon as possible.”

Blue Origin and the other two companies that won HLS awards, Dynetics and SpaceX, are in the final phases of their 10-month contracts for initial development of the landers. NASA planned to select one or more companies for full development contracts in the spring of 2021, but that may be affected by both the presidential transition and a fiscal year 2021 appropriation that is likely to give the HLS program only a small fraction of the $3.2 billion it requested.