Senior VP Jarrett Jones said the schedule had to be pushed back following the Space Force decision to not select New Glenn as a national security launch provider.
SpaceNews 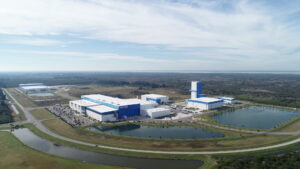 WASHINGTON — Blue Origin is pushing back the first launch of its New Glenn rocket to late 2022, saying it “re-baselined” the development of the launch vehicle after losing a key Pentagon contract last year.

Blue Origin announced Feb. 25 that it has set a new target in the fourth quarter of 2022 for the first launch of the rocket from Launch Complex 36 at Cape Canaveral Space Force Station. The company originally targeted New Glenn’s inaugural launch for 2020, but by early 2020 had delayed it to late 2021.

Jarrett Jones, Blue Origin’s senior vice president for New Glenn, told SpaceNews that the schedule had to be pushed back for technical and financial reasons following the Space Force decision in August to not select New Glenn for the National Security Space Launch (NSSL) Phase 2 Launch Services Procurement.

“That was a big hit for us,” Jones said. “We had to consider the economics.”

Blue Origin lost out to United Launch Alliance and SpaceX, who were selected as national security space launch providers from 2022 to 2027.

Not being selected cost Blue Origin billions of dollars, he argued. Blue Origin in October 2018 won a $500 million Launch Service Agreement deal with the Air Force but the LSA was terminated in December 2020 after Blue Origin received just $255.5 million. Blue Origin estimated that not winning the five-year procurement contract cost the company up to $3 billion in revenue, Jones said.

Despite the setback, “New Glenn is moving forward,” he said. “It was never a consideration” to not continue developing the vehicle for commercial and civil space customers. “Blue Origin remains committed to New Glenn, and we have the resources aligned to meet our plans.”

New Glenn will be ready to compete again for NSSL Phase 3 when the next contract goes up for bidding in 2024, said Jones. “We hope to launch NSSL payloads in the future, and remain committed to serving the U.S. national defense mission.”

After the loss of the Phase 2 contract, Blue Origin “re-baselined” the New Glenn timeline and development plan, Jones said. “We looked at everything that was on the table, including funding and customers, and we put together a high-probability schedule where we put all of our resources and spread out the necessary funding we needed.”

He cited several developments on the critical path for New Glenn to meet that new launch date, from production of the large propellant tanks for the rocket to radiation testing of its avionics. “I worry about everything,” he said.

The company has completed a qualification version of the seven-meter payload fairing for the rocket, along with a payload adapter, which will be tested later this year at NASA’s Plum Brook Station in Ohio. Blue Origin has a first stage simulator in its Florida factory that some observers caught a glimpse of earlier this month. “Within the next couple of weeks, people will start to see that roll around,” Jones said.

The company is also completing new facilities at LC-36, a former Atlas launch pad that Blue Origin took over in 2015. Major construction at the pad is now wrapping up, with system activation and checkouts starting. “The expectation is that next year it will be commissioned,” he said.

That pad alone cost the company $1 billion, part of $2.5 billion in overall investment by Blue Origin in facilities such as the New Glenn factory just outside the gates of the Kennedy Space Center and an engine factory the company completed a year ago in Huntsville, Alabama.

Jones said Blue Origin intends to deliver flight qualified BE-4 engines to United Launch Alliance on time for ULA’s planned maiden launch of its Vulcan rocket late this year. “We’re hot firing regularly and every time you turn around, we’re doing additional tests,” he said. “We have over 11,000 seconds of accumulated test time and we feel confident.”

New Glenn will fulfill its current commercial New Glenn contracts and pursue new civil space launch contracts. The company has previously announced launch contracts with Eutelsat, Mu Space, OneWeb, Sky Perfect JSAT and Telesat, and Jones said the company discussed the revised development schedules with them. “We are still meeting their needs,” he said. “No one is surprised by today’s announcement.”

Blue Origin also intends to position New Glenn to compete with SpaceX in the rideshare market for small satellite launches. “That’s a really big opportunity for us,” said Jones. “We’re doing the development work now to look at the different adapters we need to have for different satellite sizes and for reconfigurable satellites.”