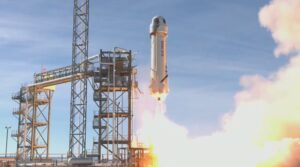 The New Shepard vehicle lifted off from Blue Origin’s West Texas test site at 12:17 p.m. Eastern. The vehicle’s crew capsule, separating from its booster about two and a half minutes after liftoff, reached a peak altitude of 107 kilometers before landing under parachutes 10 minutes and 15 seconds after liftoff. The capsule landing came a few minutes after the booster made a powered landing at the edge of its landing pad.

The flight was the first for this capsule, called “RSS First Step” by Blue Origin, as well as for the booster. The capsule featured several modifications intended to support human spaceflight, such as seats, new communications systems and displays, and environmental control systems to regulate temperature and humidity. “It’s all about the upgrades for the astronaut experience,” said Ariane Cornell, director of astronaut and orbital sales at Blue Origin, during the webcast.

Unlike several previous New Shepard flights, this vehicle did not carry science payloads. It did fly 50,000 postcards submitted by students through Club for the Future, a nonprofit affiliated with the company.

The company intends to use this spacecraft for future crewed flights. “This will be used for astronaut missions,” said Patrick Zeitouni, director of advanced development programs at Blue Origin, on the webcast.

Exactly when those crewed flights will begin remains unclear, though. In February 2019, company founder Jeff Bezos said he expected the company to begin flying people by the end of that year, but by October the company said it was slowing down those plans to ensure the vehicle was ready.

Blue Origin performed a single New Shepard test flight last year, in October, after which the company said it needed “just a couple more flights before we start to put humans on board.”

During the webcast, company representatives offered few details about those human spaceflight plans, or even when the company would start selling tickets for commercial flights. Much of the webcast was devoted to discussion of other Blue Origin activities, such as testing of its BE-4 engine and work on its lunar lander concept for NASA’s Human Landing System program.

After the safe landing of the capsule, though, Cornell was optimistic the company would soon start flying people. “We’re getting really close to flying humans. We’re getting there,” she said. “The success of this flight puts us one really big step closer to flying astronauts.”