Blue Origin is gearing up for the next test flight of its New Shepard suborbital vehicle as soon as Jan. 14.
SpaceNews 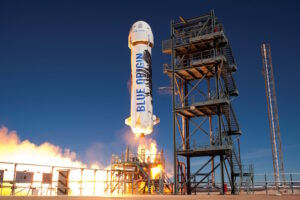 WASHINGTON — Blue Origin is gearing up for the next test flight of its New Shepard suborbital vehicle as soon as Jan. 14.

Temporary flight restrictions published by the Federal Aviation Administration Jan. 12 will close airspace above Blue Origin’s West Texas test site from Jan. 14 through Jan. 17, from 9:45 a.m. to 4 p.m. Eastern each day. Such airspace closures in the past have been linked to test flights of the company’s New Shepard suborbital vehicle.

Blue Origin has yet to announce plans to conduct a test flight. A company source, speaking on background, confirmed the company was planning a New Shepard flight as soon as Jan. 14, but offered no other details about the flight.

The company has promoted recent New Shepard test flights in advance, including highlighting research payloads the vehicle was carrying, such as those provided through NASA’s Flight Opportunities program. NASA hasn’t announced any imminent flights of payloads on New Shepard.

New Shepard last flew Oct. 13 on the NS-13 mission, carrying a number of research and technology demonstration payloads. That was the first flight of the vehicle since December 2019.

Blue Origin has still disclosed few details about its human spaceflight plans, including a timeline for doing so. The company’s founder, Jeff Bezos, said in early 2019 he expected the company to start flying people later that year, but Blue Origin later slowed down those efforts. During the webcast of the Oct. 13 flight, Blue Origin representatives said they needed “just a couple more flights before we start to put humans on board.”

Blue Origin’s main competitor in suborbital human spaceflight, Virgin Galactic, had planned to begin commercial flights of its SpaceShipTwo vehicle early this year. However, the company aborted a Dec. 12 test flight of the vehicle from Spaceport America in New Mexico when a computer system lost connection just as the vehicle ignited its engine. It glided to a safe landing back at the spaceport.

Virgin Galactic tweeted Jan. 7 it had completed the post-flight inspections and root cause analysis of the aborted flight, but did not disclose additional details about the problem. “Corrective actions have been defined and work is already underway,” the company said. Once that work is complete, the company added, it will disclose plans for its next test flight.