The Blue Origin-led team that is one of three working on lunar lander concepts for NASA’s Artemis program has delivered a full-sized mockup of that lander to the agency for testing by engineers and astronauts.
SpaceNews 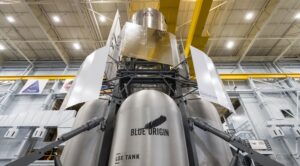 WASHINGTON — The Blue Origin-led team that is one of three working on lunar lander concepts for NASA’s Artemis program has delivered a full-sized mockup of that lander to the agency for testing by engineers and astronauts.

Blue Origin announced Aug. 20 that its “National Team” has installed an engineering model of the lander in the Space Vehicle Mockup Facility at the Johnson Space Center. The full-sized, but low-fidelity, mockup includes both the descent element, developed by Blue Origin, and ascent element, built by Lockheed Martin, and stands more than 12 meters high.

The companies developed the mockup to allow NASA astronauts and engineers to study the layout of the vehicle, including positioning of various components, and get feedback while the lander is still in an early stage of development.

“You can think about is as a couple of categories of assessments,” said Brent Sherwood, vice president of advanced development programs at Blue Origin, in an interview. One is cabin ergonomics, like controls and displays inside the spacecraft. A second is viewing angles looking out from the cabin. The evaluation will include people wearing spacesuits testing getting in and out of the lander and accessing equipment.

Those tests will allow them to get early feedback on the design at a point where it’s easier and faster to make changes. “You think you know what is the right thing to design and you try it out, and you get feedback,” he said. “That tells you what to do next.”

Despite advances in virtual reality, the companies say that a physical model like this mockup is still essential in refining the design of the lander. “Collaboration you can do physically is really important,” said Kirk Shireman, who joined Lockheed Martin Space as vice president of lunar campaigns this summer shortly after retiring from NASA as its International Space Station program manager. Virtual reality systems, he said, “can’t tell the whole picture, so it’s great to have that physical vehicle there as well.”

That includes, he said, issues like the placement of windows and other components that affect the overall structure of the lander elements. “They impact big pieces of the structure that are long-lead and need to be finalized so we can begin manufacturing.”

The tests will also identify things the designers forgot. “The most interesting part of doing this kind of mockup assessment is finding the stuff that you didn’t think of,” Sherwood said. “There are going to be surprises that are revealed by this kind of physical environment, when you can be in it and see it and feel it.”

The mockup is one of several lines of work being performed by the team, which also includes Northrop Grumman, which is developing the transfer element that moves the lander in lunar orbit, and Draper, which is providing the guidance and avionics. Sherwood said that Blue Origin has been performing tests of its BE-7 engine, which powers the descent stage, at the Marshall Space Flight Center, as well as working on storage technologies for that engine’s cryogenic propellants.

The Blue Origin-led team is one of three that won Human Landing System (HLS) awards from NASA in April, receiving $579 million. A team led by Dynetics won another HLS award, valued at $253 million, while SpaceX won the third award, worth $135 million.

The companies are about halfway through those contracts and are already looking ahead to the next competition. Sherwood said the Blue Origin-led team is preparing for a certification baseline review in the next few weeks, and expects NASA to release a draft of the call for proposals for the next phase of the program in early September. Those proposals will be due in late fall for a downselect to one or two companies next spring.

Whether NASA will be able to continue supporting one or two landers will depend both on the status of the concepts as well as available funding. NASA sought $3.3 billion for the HLS program in its fiscal year 2021 budget proposal, but a spending bill passed by the House in July provides less than $630 million. The Senate has yet to take up its version of a spending bill.

Sherwood said that uncertain budget is the biggest risk to being able to have a lander ready to take astronauts to the surface of the moon in 2024. “This program operates at the speed of appropriations,” he said. “The program plan gets us there, but it all depends on the budget.”

That is beyond the control of any of the companies in the program. “All we can control is the work that we need to do,” he said.

Budgetary issues aside, Sherwood and Shireman said they were confident that their lander can win continued NASA support and be ready in 2024. “Our experience as a team, our experience with this hardware, really will be a big advantage as we move forward to meet NASA’s goal of putting the next people on the moon in 2024,” Shireman said.

The mockup is a big step in that effort, Sherwood said. “This is really the beginning of it getting real.”