Chris Ferguson, the former NASA astronaut who was to command the first crewed flight of Boeing’s CST-100 Starliner commercial crew vehicle, has withdrawn from the mission for personal reasons, the company announced Oct. 7.
SpaceNews 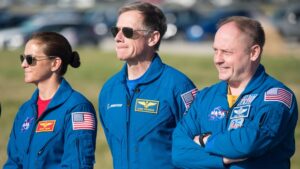 WASHINGTON — Chris Ferguson, the former NASA astronaut who was to command the first crewed flight of Boeing’s CST-100 Starliner commercial crew vehicle, has withdrawn from the mission for personal reasons, the company announced Oct. 7.

Ferguson, who joined Boeing in 2011 after a NASA career that included commanding the final space shuttle mission, was to lead the Crew Flight Test (CFT) mission currently scheduled for launch in the middle of 2021, a flight that also includes NASA astronauts Nicole Mann and Mike Fincke.

In an interview, Ferguson said he decided to step down from the mission because of family obligations. “It was a decision that was not made lightly,” he said. “It surrounds what has really amounted to a year that is replete with family obligations that I just do not want to risk missing.”

He didn’t elaborate on those obligations, beyond being “the best kind of family issues.” He noted that, over his career as a NASA astronaut and, before that, a U.S. Navy pilot, he was away from his family and missed key moments. “The events next year are good ones, and I just don’t want to risk missing them.”

Ferguson will be replaced by NASA astronaut Barry “Butch” Wilmore, who had been training as a backup for the first and second crewed Starliner flights. “Having had the chance to train alongside and view this outstanding crew as backup has been instrumental in my preparation to assume this position,” Wilmore said in a statement. “Stepping down was a difficult decision for Chris, but with his leadership and assistance to this point, this crew is positioned for success.”

“Butch will be able to step in seamlessly, and his previous experience on both space shuttle and space station missions make him a valuable addition to this flight,” Kathy Lueders, NASA associate administrator for human exploration and operations, said in the statement. “Chris has been a talented member of the crew for this mission. The NASA and Boeing commercial crew teams sincerely appreciate the invaluable work he has completed and will continue to lead in the development of Starliner, which will help ensure that the Starliner Crew Flight Test will be a success.”

Under earlier plans, Ferguson would have already flown the CFT mission. However, problems with the Orbital Flight Test uncrewed test flight last December delayed the CFT mission. “We were on a very good trajectory to launch later this year,” he said. With that mission delayed until at least the middle of next year, “we’re sort of on a slow simmer” in terms of training.

When CFT was scheduled to fly this year, NASA was considering extending the mission to as long as six months given overall delays in the commercial crew program and limited access to Soyuz seats. That included, for Ferguson, additional training on International Space Station operations.

With SpaceX’s Crew Dragon now in service, a long mission is no longer required, but he said NASA and Boeing hadn’t decided on the duration by the time he decided to withdraw from the crew and wasn’t a factor in his decision. “The duration of the mission wavered with when we launched,” he said. “I’m fully convinced we wouldn’t know the duration until we did go.”

Ferguson will remain involved in the Starliner program as director of crew and mission operations. “I’ll also have the ancillary role of being the eyes and the ears of the CFT crew,” he said. That work will include following the spacecraft during testing and “making sure we give reasonable attention to issues that will need to be addressed.”

Before the CFT mission is the OFT-2 mission, a second uncrewed test of the Starliner to confirm that problems found on the first OFT mission have been corrected and that the vehicle is ready to carry astronauts. Ferguson said preparations for that mission are going well despite concerns noted at an Oct. 1 meeting that work needed to implement recommendations might not be done in time for a December launch.

“So far things are looking pretty good,” he said. “The December-January timeframe is reasonable” provided it can fit into the launch schedule for United Launch Alliance, whose Atlas 5 will launch Starliner.

While Ferguson will not fly on the CFT mission, he did not rule out going on a later mission. “I’ve been asked what this means long-term: does it mean that I’m leaving or does it mean that I’m staying and I just can’t do this,” he said. “I just cannot launch next year. You can read into that as you see fit.”