Boeing has completed a requalification of software on its commercial crew spacecraft as it prepares to launch the vehicle on a second test flight as soon as late March.
SpaceNews 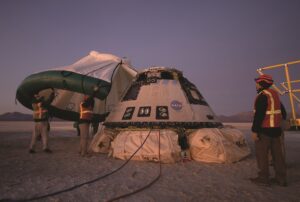 WASHINGTON — Boeing has completed a requalification of software on its commercial crew spacecraft as it prepares to launch the vehicle on a second test flight as soon as late March.

Boeing announced Jan. 18 it completed a “formal requalification” of the software on its CST-100 Starliner spacecraft. That work included reviews of the software itself as well as the processes by which Boeing developed and tested the software.

“The work this team put into exhaustively wringing out our software is a defining moment for the program,” John Vollmer, vice president and program manager for Starliner, said in a company statement. “We’re smarter as a team having been through this process, and most importantly, we’re smarter as a human spaceflight community.”

Software problems were at the root of a flawed initial test flight, known as Orbital Flight Test (OFT), of the spacecraft in December 2019. Starliner’s timer was off by 11 hours, causing the spacecraft to think to think it was in a different mode of flight immediately after spacecraft separation. The spacecraft ended up using more fuel for its thrusters than planned to achieve orbit, ruling out a planned docking with the International Space Station.

Engineers then found a second software problem that could have caused the spacecraft’s service module to bump into the crew capsule after separation just before reentry. That risked damaging the capsule’s heat shield or causing the capsule’s orientation to become unstable. A software patch to correct the problem was installed just hours before reentry on that shortened test flight.

Boeing executives said two months after the OFT mission that they were revising their software development processes to address those issues. “We’re going to apply additional rigor to systems engineering and software development,” said John Mulholland, Starliner program manager at Boeing at the time.

An independent review of the OFT mission generated 80 recommendations, with software requirements, development and testing accounting for a large fraction of them. NASA said in December that Boeing had completed work on more than 90% of the recommendations.

Boeing is not finished with testing the Starliner software. Additional work is planned with United Launch Alliance to test integration of Starliner with its Atlas 5 launch vehicle, and with NASA to test joint operations with the ISS.

Boeing will also perform an end-to-end simulation of the upcoming second OFT mission, including complete testing of the software from prelaunch operations through docking, and from undocking to landing. Boeing acknowledged last year they didn’t do end-to-end software testing, instead breaking up the tests into smaller segments.

That next OFT flight, known as OFT-2, is scheduled for March 29. Boeing agreed last year to perform the second uncrewed test flight at its own expense to complete the testing of the spacecraft, including docking with the ISS, before flying astronauts on the Crew Flight Test (CFT) later this year.

That test flight could take place slightly earlier. Phil McAlister, director of commercial spaceflight at NASA Headquarters, said at a Jan. 13 meeting of the NASA Advisory Council’s Human Exploration and Operations Committee that it may be possible to move up the launch to March 25, although NASA and Boeing have not made a formal decision on a revised launch date for OFT-2.

He praised Boeing for the work they have done to correct the problems with Starliner found during the original OFT mission. “They have certainly not taken their foot off the gas, and we continue to work with Boeing and get them ready for their OFT-2 flight,” he said.

If the OFT-2 mission is successful, the CFT mission would follow, sending astronauts Mike Fincke, Nicole Mann and Barry Wilmore to the ISS as soon as this summer. NASA previously contemplated extending the CFT mission from a couple weeks to as long as several months to maintain a U.S. presence on the ISS.

That extended CFT mission is unlikely now, McAlister said, with SpaceX’s Crew Dragon in service. The Crew-1 mission is currently at the station and expected to remain there until May. Crew-2 is scheduled to launch in the spring, overlapping with Crew-1, while a third Crew Dragon mission, Crew-3, is planned for the fall.

“Now that SpaceX is operational, we don’t see the need to necessarily stress that,” he said, noting there was no official decision yet on the length of the CFT mission. “We’re thinking of making that a regular test flight.”