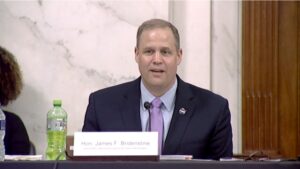 Bridenstine, testifying before the commerce, justice and science subcommittee of the Senate Appropriations Committee Sept. 23, said that NASA needed the full $3.2 billion it requested in its fiscal year 2021 budget proposal for the Human Landing System (HLS) program in order to keep a 2024 human return to the moon on schedule.

HLS received only about $600 million in a House spending bill passed in July. “We’re very grateful for that. I want to be clear,” he said. “I will also tell you that that’s not enough to achieve the 2024 moon landing.”

“Accelerating it to 2024 requires a $3.2 billion budget for 2021 for the Human Landing System, which is in the president’s budget request,” he added. “Anything this committee can do to help us get those resources is critically important.”

Senators, though, didn’t immediately signal their interest in doing so. Sen. Jerry Moran (R-Kan.), chairman of the subcommittee, was the most engaged on the issue, asking a series of questions about the Artemis program and its funding requirements, as well as the decision last year to move up that human return to the moon from 2028 to 2024.

Bridenstine argued that speeding up the program would save money in the long run. “The faster you go, the less it costs,” he said. “We need to compress the timeline, we need to go faster and retire as much risk as possible.”

While Moran was supportive in general of the program, he did probe for ways to reduce costs. Bridenstine noted in his testimony that NASA plans to keep at least two, and perhaps all three, companies currently in the HLS program when it decides on the next phase of the effort early next year. “It just depends on what they come back with” in their proposals, he said.

“Is there any thought you can go from three to one and skip the expense of two in competition?” Moran asked.

Bridenstine said there have been discussions along those lines, but emphasized he wanted to maintain competition in the HLS program. “I worry about going down to one,” he said. “When you eliminate the competition, you end up with programs that inevitably get dragged out, and you end up with cost overruns and schedule delays.”

Sen. Jeanne Shaheen (D-N.H.), the ranking member of the subcommittee, questioned the emphasis on the Artemis program over science and education programs proposed for termination in the budget request. “I’ve heard a lot of excitement among young people in particular” about Artemis, she said. “But, of course, we know that NASA needs to be about more than just a single moonshot.”

She and other senators brought up several of those programs, including the Roman Space Telescope, PACE and CLARREO Pathfinder Earth science missions, and NASA’s education efforts, known as the Office of STEM Engagement. “I look forward to working with you, Chairman Moran, to ensure that we can pursue sending humans to the moon and Mars without sacrificing other important NASA missions,” she said.

When Bridenstine defended NASA’s education efforts given the proposed termination of the Office of STEM Engagement, Moran responded, “I think the Senate will see it a different way, as we have in previous years.” Congress rejected proposals to close the office in the previous three years.

The next steps in the budget process in the Senate are not clear. The new fiscal year starts Oct. 1 but Senate appropriators have yet to mark up any spending bills, let alone have the full Senate vote on them. The House passed a continuing resolution Sept. 22 that will fund the federal government through Dec. 11, a bill the Senate is expected to approve to avoid a government shutdown.

Shaheen, in her opening remarks, expressed frustration with the overall appropriations process. “You and I worked on a bipartisan bill,” she said to Moran. “We had that ready to move forward in June.”

Moran said he was convinced that he could work with Shaheen and other committee members on a bipartisan bill that “would receive broad support” in the full Senate. “We have the capability of delivering that product. We just need to be given the opportunity to do so,” he said. He didn’t state when such a bill would be ready.