Jim Bridenstine used part of his final full day as NASA administrator to call on the incoming administration to continue the Artemis program and return humans to the moon.
SpaceNews 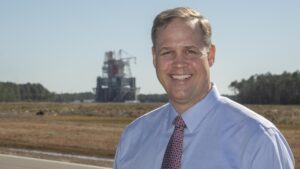 WASHINGTON — Jim Bridenstine used part of his final full day as NASA administrator to call on the incoming administration to continue the Artemis program and return humans to the moon.

A Jan. 19 briefing on the Green Run static-fire test of the Space Launch System three days earlier became an opportunity for Bridenstine, who leaves the agency Jan. 20 at the end of the Trump administration, to reflect on his nearly three years on the job and his desire to see the agency’s human space exploration program continue.

“How do we build a program that can endure the test of time?” he said, noting the starts and stops of efforts dating back to the Space Exploration Initiative three decades ago. “We need our Artemis program, we need our moon-to-Mars program, to span generations.”

The failures of past efforts mean that Bridenstine, born in 1975, is the first NASA administrator not to have been alive when people last walked on the moon. “I think it’s important that I be the last NASA administrator in history that wasn’t alive when we had people living and working on the moon,” he said. “That’s a failure of the United States and of humanity. We need to make sure that we’re leading the world in a return to the moon and on to Mars.”

The incoming Biden administration has not detailed its plans for the space agency. A passage in the Democratic Party platform published last July indicated support for a human return to the moon, but did not endorse the Trump administration’s 2024 goal for doing so, a timeframe most in the industry now see as infeasible given limited funding and technical challenges.

“NASA needs to go back and look at the what the options are to go to the moon as quickly as possible,” Bridenstine said in an interview after the Jan. 16 Green Run test at the Stennis Space Center. That’s made more difficult, he acknowledged, by the funding shortfall for the Human Landing System (HLS) program for developing crewed lunar landers, which received only about one-fourth of the $3.3 billion NASA sought for fiscal year 2021.

In the call, Bridenstine said NASA was still analyzing the impact of the reduced HLS funding for that 2024 goal, given that the omnibus spending bill was signed into law less than a month ago. “NASA is doing its work to figure out, number one, do we need to change plans,” he said. “I have no doubt that the amazing people at NASA are going to present a range of options for our return to the moon that the next administration can fully buy into and support.”

Those plans, he said in the earlier interview, should include the SLS. “If we’re talking about sending humans to the moon, that’s the highest probability of success at the earliest possible moment,” he said. “Given the amount of effort and time and investment that has already been made, let’s just get it over the finish line and then go from there.”

Bridenstine is leaving NASA with relatively little fanfare, such as a farewell ceremony. Jim Morhard, the departing deputy administrator, posted on Twitter a tribute video for Bridenstine Jan. 19, thanking him for his work leading the agency.

.@JimBridenstine served @NASA with determination and passion. This agency accomplished stunning feats under his leadership, and made history several times over. Thank you and Ad Astra! pic.twitter.com/kFVvbJPn7E

“This has been an emotional week just all the way around,” Bridenstine said in the interview. He said he had been in Washington just before the Green Run test “doing our farewells to people.”

With Bridenstine and Morhard departing, Steve Jurczyk, NASA associate administrator, will serve as acting administrator until the Biden administration nominates, and the Senate confirms, a permanent successor. The new administration hasn’t stated when it anticipates announcing a nominee, but did announce its “science team” Jan. 15, including the nomination of geneticist Eric Lander as director of the Office of Science and Technology Policy.

“I think the Biden-Harris administration would very much like to name, from everything I understand, the first woman NASA administrator,” said Jack Burns, a professor of astronomy at the University of Colorado who served on the NASA transition team for the Trump administration four years ago, during a session of the 237th Meeting of the American Astronomical Society Jan. 14. “Some of the names that have been put forward are extremely well qualified.”

Bridenstine, in the interview, offered a similar assessment, but without identifying any particular candidates. “I’ve heard some names, all very qualified, very capable people,” he said. “I’m confident that the future is bright.”

That transition work has taken place quietly, and without some of the conflict and drama seen at other agencies where the outgoing Trump administration was uncooperative. “The situation at NASA, both in the last transition and this transition, has in fact been much closer to normal,” Burns said. “In talking to the Biden-Harris transition team for NASA, I have the sense that there has been good collaboration.”

Bridenstine said he hasn’t made any plans for his future after NASA, other than returning to Oklahoma and spending time with his family there. “I love space, but I don’t know what the future holds there,” he said when asked if he would like to remain in the industry in some way. “We’ll have to see.”

Bridenstine did say he’ll be closely following the agency, planning to watch next month’s landing of the Mars 2020 rover and the Artemis 1 launch. He also pledged to support whomever succeeds him as the leader of NASA. “Whoever the next NASA administrator is, I’m going to be all-in,” he said in the interview. “However I can help them, I want to help them.”

He reiterated that point at the end of the Green Run briefing. “I will be watching with great interest,” he said. “There will be a new NASA administrator, and when that person comes in, they’re going to have my full support to do the amazing things that NASA does.”