The Canadian Space Agency (CSA) is moving ahead on efforts to develop lunar science payloads and a small rover that could fly to the moon on a NASA-sponsored lander mission.
SpaceNews 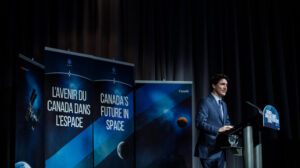 WASHINGTON — The Canadian Space Agency (CSA) is moving ahead on efforts to develop lunar science payloads and a small rover that could fly to the moon on a NASA-sponsored lander mission.

The CSA announced Nov. 27 it awarded six contracts with a total value of $2.9 million Canadian ($2.2 million) to five companies and universities for initial “Phase 0” studies of lunar science instruments. The instruments range from spectrometers and particle telescopes to an “agriculture feasibility” payload.

The contracts, with individual values ranging between $300,000 and $600,000, are intended to study the feasibility of the proposed instruments and how they will support lunar science. The contracts are expected to last for up to nine months.

The contracts are part of CSA’s Lunar Exploration Accelerator Program (LEAP), an initiative that the Canadian government unveiled in February 2019 at the same time as it announced it would provide a robotic arm for the NASA-led lunar Gateway. The program, with a planned budget of $150 million over five years, is intended to support a wide range of science and technology initiatives associated with lunar exploration.

In addition to the science awards, CSA issued contracts worth $3.3 million Oct. 29 to two companies, Canadensys Aerospace Corporation and NGC Aerospace Ltd., for development of lunar technology payloads. Canadensys will develop a 360-degree camera to provide panoramic images of the lunar surface while NGC Aerospace will demonstrate a navigation system.

CSA is also in the initial phases of a “microrover” that it plans to develop and fly in cooperation with NASA. The agency published a letter of interest Oct. 23 announcing it would formally issue a request for proposals for the rover by early 2021, awarding two contracts for Phase A feasibility studies in the summer. CSA will then select one for full-scale development.

The rover will have a mass of 30 kilograms and carry two payloads, one provided by CSA and the other by NASA. “The idea is that we want this mission to demonstrate Canadian lunar mobility technology on the moon and to gather science data,” said Erick Dupuis, director of space exploration development at CSA, during a session of the Canadian Space Summit online conference Nov. 27.

Dupuis said CSA has negotiated a ride to the moon on a NASA Commercial Lunar Payload Services (CLPS) lander mission. “In exchange for launching us, we are providing accommodations for a U.S. instrument on our rover,” he said. He said that the agreement with NASA also includes flying additional Canadian lunar science payloads on CLPS missions, fixed to landers.

He did not disclose the estimated cost of the rover mission, but said it would launch no sooner than late 2024, and more likely in 2025. The goal is for the rover to operate for at least one lunar day, and possibly a second if it can survive the two-week lunar night.

Canada is not alone in looking to other countries to fly lunar rovers. The United Arab Emirates announced in September it planned to build a small rover, weighing only about 10 kilograms, carrying three science instruments. Officials said they will seek either to partner with another space agency, or purchase space on a commercial lunar lander, to transport their rover to the moon.

While the CSA rover project is tied to NASA’s CLPS program, Dupuis said the agency was open to other partnerships for flying its payloads to the moon. “We have a pre-negotiated agreement with CLPS to get the launch of our payloads to the moon, so that is under our belt, but other opportunities could be out there,” he said, such as partnerships with the European Space Agency. “We are open to all mechanisms.”