NASA and the Canadian Space Agency (CSA) have finalized an agreement regarding Canada’s participation in the Artemis program, which includes flying a Canadian astronaut on a mission around the moon in 2023.
SpaceNews 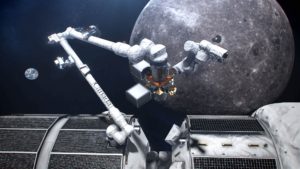 WASHINGTON — NASA and the Canadian Space Agency (CSA) have finalized an agreement regarding Canada’s participation in the Artemis program, which includes flying a Canadian astronaut on a mission around the moon in 2023.

The agreement, announced by the two agencies Dec. 16, confirms that Canada will provide the Canadarm3 robotic arm for the lunar Gateway. It will also provide interfaces for Gateway modules to allow the arm to move across the exterior of the Gateway to install payloads and perform maintenance.

A commercial logistics spacecraft will deliver Canadarm3 to the lunar Gateway in 2026. SpaceX received a contract from NASA in March to transport cargo to the station using a version of its Dragon spacecraft called Dragon XL.

Canada will, in turn, get two seats on future Artemis missions. One will be on Artemis 2, the first crewed flight of the Orion spacecraft scheduled for 2023, which will fly around the moon. The second will be a mission to the lunar Gateway at a later, unspecified date.

Getting a seat on Artemis 2, expected to be the first crewed mission beyond Earth orbit since Apollo 17 in 1972, was a particular point of pride for Canadian officials. “This will make Canada only the second country, after the U.S., to have its astronauts in deep space,” said Navdeep Bains, Canadian minister of innovation, science and industry, during a press conference announcing the agreement between NASA and CSA.

Canadian officials said they have not selected which of its four current astronauts will fly on either Artemis 2 or the later Gateway mission. “Canada is fortunate to have a strong corps of highly trained professional astronauts, any one of whom would be an excellent choice,” said CSA President Lisa Campbell. A decision for Artemis 2 will be made closer to launch, but she didn’t give a specific schedule.

NASA has also not made any crew assignments for Artemis 2 or later missions. The agency announced Dec. 9 an “Artemis Team” of 18 NASA astronauts who would be eligible for later flight assignments. Andrea Matte, a spokesperson for the Canadian Space Agency, said after the press conference that the Canadian astronauts selected for those missions would then join the Artemis Team.

In a NASA statement, Administrator Jim Bridenstine noted that Canada’s commitment to the Artemis program dates back to the February 2019 announcement that it would develop Canadarm3 for the Gateway. “Canada was the first international partner to commit to advancing the Gateway in early 2019, they signed the Artemis Accords in October, and now we’re excited to formalize this partnership for lunar exploration,” he said.

Canadian officials used the announcement to also discuss the progress on Canadarm3. CSA awarded a contract Dec. 8 to MDA, the Canadian company whose experience in space robotics includes the original shuttle-era Canadarm and the Canadarm2 on the International Space Station, to begin Phase A technical studies of Canadarm3. The new arm will be similar to Canadarm2, but will incorporate artificial intelligence technologies to support operations when no one is on the Gateway.

Canada’s four active astronauts — Jeremy Hansen, Joshua Kutryk, David Saint-Jacques and Jenni Sidey-Gibbons — spoke at the briefing and all said they were excited about the possibility to fly on an Artemis mission. Flight opportunities for Canadian astronauts in general are rare, as it is the smallest of the five major partners on the ISS. Of the four, only Saint-Jacques has flown in space so far.

“The international corps here in Houston is over the moon excited, I’ll say that today, by the prospect of these missions,” said Kutryk. “We’re all feeling particularly inspired right now in a way I hope all Canadians can feel inspired.”

Asked if he thought he’d ever get a chance to go to the moon, Hansen noted that he became an astronaut in 2009, when NASA was still implementing the Constellation program to send humans to the moon, but that the new effort offered a “tremendous opportunity” for Canada. “I’m excited that a Canadian will be on Artemis 2,” he said. “We’re paving the way for Canadians to do even more things in space: eventually, hopefully, one day a Canadian on the moon and on Mars.”