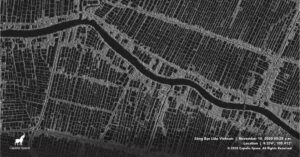 Capella Space conducted the first commercial demonstration of the IDRS service Nov. 12 when it sent tasking orders to Sequoia through the Inmarsat-4 L-band constellation in geostationary orbit.

“Capella Space becomes the first & only commercial SAR company in the world to use a GEO satellite for real time tasking,” Payam Banazadeh tweeted Nov. 23. “This means faster delivery times and more actionable information from space.”

“In-orbit connectivity represents an exciting new growth market for both Inmarsat and Addvalue,” Todd McDonell, Inmarsat Global Government president, said in a statement. “What is critical to LEO operators such as Capella Space is the ability to offer timely services their customers now expect in a connected world. Inmarsat’s L-band satellite network is uniquely placed to facilitate seamless real-time communications that are designed for mobility and can be administered globally.”

Inmarsat and Addvalue also expect IDRS technology to be adopted by customers gathering climate data and performing disaster relief missions because it allows operators to send commands to satellites without waiting for them to pass over ground stations.

“The new data link should reduce waiting times for such data transfers from several hours to a handful of minutes,” according to the Nov. 23 news release. “This can enhance life-saving efforts in a natural disaster or enable observers to spot issues and direct resources to tackle them before they develop or get out of hand.”

“We’re proud to team-up with Inmarsat and Addvalue to deliver an entirely new level of efficiency and functionality to our customers,” Christian Lenz, Capella Space vice president of engineering, said in a statement. “This real-time connectivity will allow us to significantly reduce the time between customer tasking requests and when we collect the data on-orbit.”

IDRS is the brainchild of Khai Pang Tan, Addvalue Technologies chief operating and technology officer. In 2012, he realized that the problem of communicating with satellites in low Earth orbit could be solved if operators could relay data through the Inmarsat-4 constellation of geosynchronous L-band communications satellites and Inmarsat’s Broadband Global Area Network.