China’s Chang’e-5 orbiter is heading for a gravitationally stable point in space on an extended mission after delivering fresh lunar samples to Earth.
SpaceNews 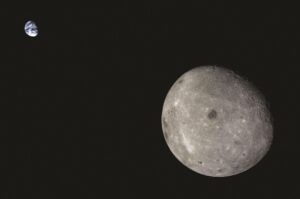 HELSINKI — China’s Chang’e-5 orbiter is heading for a gravitationally stable point in space on an extended mission after delivering fresh lunar samples to Earth.

The spacecraft is now heading to a Sun-Earth Lagrange point to carry out observations of the local environment, the Sun, and perform operational tests.

The Chang’e-5 orbiter left lunar orbit late Dec. 12 Eastern along with a return capsule containing lunar samples. The two spacecraft separated around 5,000 kilometers from Earth Dec 16., with the return capsule performing a ‘skip’ reentry into the atmosphere. The return capsule landed at 12:59 Eastern Dec. 16 with 1.731 kilograms of lunar materials.

Meanwhile the orbiter had conducted an avoidance burn. It was initially unclear if the avoidance burn referred to avoiding the return capsule or the Earth’s atmosphere.

Amateur radio operators first confirmed the Chang’e-5 orbiter was still in space and heading towards the moon. Official confirmation has now been provided as to the spacecraft’s status.

Hu Hao, a chief designer of the third (sample return) phase of the Chinese lunar exploration program, told China Central Television (Chinese) Dec. 20 that the orbiter is now on an extended mission to a Sun-Earth Lagrange point.

Hu said the extended mission was made possible by the accurate orbital injection by the Long March 5 launch vehicle, the same rocket which failed in July 2017 and delayed Chang’e-5 by three years. The Chang’e-5 orbiter has more than 200 kilograms of propellant remaining for further maneuvers.

While unspecified, it is believed that the Chang’e-5 orbiter will enter orbit around L1, based on the reference to planned solar observations. The orbiter is equipped with optical imagers.

The team will decide on a further destination after tests and observations have been conducted, Hu said.

Chang’e-2, which orbited and mapped the moon in 2010, later visited Earth–Sun L2 Lagrangian point to test tracking and ground networks. It then performed a flyby of asteroid 4179 Toutatis.

The orbiter the 2014 Chang’e-5 T1 mission to test a skip reentry of the return capsule was likewise sent an extended mission after performing its primary tasks. That spacecraft entered a halo orbit around Earth-moon Lagrange point 2, taking images of the Earth and moon but also indicating China may be lining up an unprecedented lunar far side landing with the Chang’e-4 spacecraft, then an used backup to the successful Chang’e-3. CE5-T1 also imaged candidate landing sites for the Chang’e-5 mission proper.

Possible future scenarios for the Chang’e-5 orbiter could include visiting the Sun-Earth L4 or L5 points. These triangular libration points are more stable than the other three points and could harbor near-Earth objects. Imagers could be used to survey the region for speculated Earth Trojan asteroid objects.

Such objects would co-orbit with Earth but lie 60 degrees ahead of (L4) or behind (L5) the planet. In October 2021 NASA will launch LUCY, a first mission to visit Jupiter Trojans.

A paper submitted to the 2018 International Astronautical Congress suggested that Queqiao, the relay satellite facilitating Earth-lunar far side communications for the Chang’e-4 mission, could be sent post-primary mission to Earth-moon L4 or L5 for a similar survey, citing great value for both astronomers and engineers.

Meanwhile on Earth the reentry capsule has since been transferred to Beijing. The canister containing the lunar samples has been handed over to the Chinese Academy of Sciences ahead of preparation, analysis and storage at a specially constructed facility.