China’s Chang’e-5 spacecraft are preparing for a first-ever robotic rendezvous and docking in lunar orbit, a major hurdle to delivering lunar samples to Earth.
SpaceNews 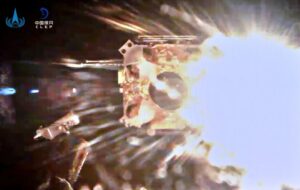 HELSINKI — China’s Chang’e-5 spacecraft are preparing for a first-ever robotic rendezvous and docking in lunar orbit, a major hurdle to delivering lunar samples to Earth.

At 11:15 a.m. Eastern Saturday an ascent vehicle fresh off the moon and laden with samples will begin an approach phase with the orbiting Chang’e-5 service module, with both spacecraft traveling at around 1.6 kilometers per second.

The pair are planned to rendezvous and dock by around 16:40 p.m. in one of the most challenging and complex milestones in the ambitious Chang’e-5 sample return mission.

Saturday’s crucial orbital maneuvers will robotically mimic the crewed lunar orbit rendezvous and docking activities of the U.S. missions of the 1960s and 1970s. The last lunar sample return mission—the Soviet Union’s Luna 24 in 1976—used a simpler but limited direct return from the moon.

While primarily aiming to deliver samples, Chang’e-5 appears to fit into a step-by-step, methodical approach to Chinese exploration activities while expanding capabilities and possibilities.

The techniques tested and demonstrated by Chang’e-5 will be applicable to ZhengHe, a near Earth asteroid sample mission, a planned Mars sample return and potentially crewed lunar landings. But success is far from certain.

Rendezvous in an orbit far, far away

While China has carried out robotic rendezvous and docking operations in low Earth orbit with its Tiangong, Tianzhou and crewed Shenzhou spacecraft. Earth-moon distances and associated time delay, and the discrepancy in mass between the ascent vehicle—expected to be around 300 to 400 kilograms at time of docking—and the orbiter, bringing new challenges.

Peng Jing, deputy chief designer of the Chang’e-5 probe system of China Academy of Space Technology (CAST), told state media that the docking has a very high requirement on accuracy, with an error range less than five centimeters.

Live coverage for the event, something never before attempted, is not expected from China. While the launch was live streamed, some subsequent milestones including landing and ascent vehicle launch were not.

China has likewise been guarded on the timing of the key mission events. A leak on Chinese social media has however provided timings which have so far very closely matched events.

Chang’e 5 ascent module launch from the surface of Luna.

Footage of the sampling activities was broadcast by China Central Television and mirrored by the English language version CGTN on Youtube, providing an unusual level insight into Chinese lunar operations.

“The landing area appears rather smooth, with only small craters. The soil and lithic clasts collected by Chang’e-5 should be predominated by the local materials [and] this is important for implications of the analytical data,” Dr. Lin Yangting, at the Institute of Geology and Geophysics in Beijing under the Chinese Academy of Sciences, told SpaceNews.

The lander has also carried out readings of the surface with a penetrating radar, aiming to discern the subsurface stratigraphy and insights into geological events, as well as an imaging spectrometer for mineralogical and compositional analysis of the landing site.

Jessica Flahaut, a planetary geologist at the University of Lorraine, France, says the radar and spectrometer could provide both ground truth for orbital measurements, and some geologic context for the sampling.” They can also be very useful for comparing in situ versus laboratory measurements, as we know for instance that the structure and porosity of the regolith may be altered when the samples are brought back to Earth.”

The lander is not expected to survive the coming lunar night unlike the Chang’e-3 and -4 landers. This is due to a lack of equipment such as radioisotope heater units needed to protect electronics during lunar nights as cold as -190 degrees Celius (-310 degrees Fahrenheit).

The four-module, high-tempo 23-day mission launched from Wenchang Nov. 23, achieving lunar orbit 112 hours later. Separation of the lander and ascent vehicle stack from the service module and reentry capsule followed. After safely setting down in the moon’s Oceanus Procellarum Dec. 1 the lander conducted sampling separately with a scoop attached to a robotic arm and by drilling down into the lunar regolith.

On Friday at 10:10 a.m. Eastern the mission’s ascent vehicle with a mass of a few hundred kilograms lifted off from atop the Chang’e-5 lander. The small spacecraft powered by a 3000N engine successfully entered the desired lunar orbit six minutes later.

Fantastic footage of the Chang’e-5 descent and landing released. Great view of the horizon there are clear phases of deceleration, the spacecraft going vertical, coarse hazard avoidance, hovering and then the landing. [CNSA/CLEP] https://t.co/q6i9Nxeg2d pic.twitter.com/HvGwClRGG4

A claw-like system will be used to bring about the docking of the ascent vehicle and orbiter. The sample container will then be transferred from the ascender to the reentry vehicle, with the latter to then be jettisoned.

The service module will then spend 6-7 days in lunar orbit awaiting the optimal Earth return trajectory window for a reentry and landing at Siziwang Banner, Inner Mongolia 112 hours later.

The reentry vehicle will separate from the service module around 5,000 kilometers from Earth. A skip reentry, involving bouncing off the atmosphere—a maneuver tested by the Chang’e-5 T1 mission in 2014—to deal with the high-velocity return from the moon will follow. ESA tracking stations will support this critical phase as the spacecraft attempts reentry.

With the Chang’e-5 lander, orbiter and ascent vehicles all carrying out various tasks, China has eight operational spacecraft on or in the vicinity of the moon. The Chang’e-4 lander and Yutu-2 rover are currently hibernating for a 24th lunar night since making the first ever soft-landing on the lunar far side. The Queqiao relay satellite which facilitates communications with Earth for Chang’e-5 orbits at Earth-Moon Lagrange point 2 while also carrying out low-frequency astronomy experiments.

The 2014 Chang’e-5 T1 mission service module is also still in orbit around the moon, having facilitated a skip reentry test, imaged potential landing sites and simulated rendezvous and docking in lunar orbit. China’s first lunar lander, Chang’e-3, is still operational in Mare Imbrium, although functioning with just one, diminished payload.

It is unknown if the Chang’e-5 service module will have extended mission objectives like that of Chang’e-5 T1, the movement of which to Earth-Moon Lagrange point 2 provided the first hints at the later far side landing.

The fate of the ascent vehicle, presumably with propellant remaining, is also unknown. A coordinated impact and observation would be one possibility, depending on the availability and resolution of imagers in lunar orbit. NASA, with prior agreement from Congress, discussed the possibility of the Lunar Reconnaissance Orbiter observing a signature of the landing plume of the Chang’-4 lander.