The initial elements of NASA’s lunar Gateway are facing cost overruns and delays primarily because NASA has changed the requirements of the program since awarding contracts last year.
SpaceNews 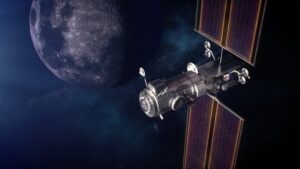 WASHINGTON — The initial elements of NASA’s lunar Gateway are facing cost overruns and delays primarily because NASA has changed the requirements of the program since awarding contracts last year.

A Nov. 10 report by NASA’s Office of Inspector General (OIG) concluded that delays to the program, created by changes NASA made to its plans for the development of the Gateway, make it unlikely that the Gateway will be available to support the agency’s planned 2024 lunar landing on the Artemis 3 mission.

NASA awarded a contract to Maxar in May 2019 for the first element of the Gateway, the Power and Propulsion Element (PPE), which will provide power and electric propulsion. In July 2019, NASA announced its intent to award a sole-source contract to Northrop Grumman for the Habitation and Logistics Outpost (HALO), which will serve a habitation module and docking node.

Since the contract awards, NASA has changed requirements for the overall Gateway program and the two modules. The biggest change was NASA’s decision earlier this year to combine the PPE and HALO and launch them together, rather than launch them separately and have them dock in lunar orbit.

NASA billed that decision as one that both reduced risk and costs. “We’ve saved a lot of money by going ahead and putting those together on a single launch vehicle, as well as knocked down both technical and operational risk for the program,” Doug Loverro, at the time NASA associate administrator for human exploration and operations, said in May.

The OIG report, though, found problems with this change. “However, it has also contributed to cost increases due to technical changes to the PPE, an elevated launch risk, and potential performance shortfalls primarily due to the increased mass of both elements that slows the electric propulsion transit to a lunar orbit,” it stated.

That decision cost Maxar $27.5 million it had already paid to SpaceX to launch the PPE under a commercial contract, which it may only partially recoup from the government. The OIG report also raised concerns that the combined PPE/HALO stack might be too large to fit on commercial launch vehicles and prevent HALO from carrying cargo for initial Gateway activities, although earlier this year NASA said it was confident at least one launch vehicle could support the mission.

The report stated that NASA’s current estimated launch date for the PPE and HALO is May 2024. However, to be in position in lunar orbit to support an Artemis 3 mission in late 2024, the Gateway modules would have to launch no later than February 2024. That schedule, moreover, lacks the recommended six months of schedule margin. Therefore, OIG concluded, “the Gateway Program must compensate for a shortage of 9 months of schedule in order to meet the required launch date — a feat which, in our judgment, is likely impossible.”

That schedule issue may be a moot point. NASA officials stated earlier this year they did not require the use of the Gateway for the Artemis 3 landing, instead having Orion dock directly with the lunar lander in orbit around the moon. Moreover, a 2024 landing now appears in jeopardy because of funding shortfalls for NASA’s Human Landing System program as well as potential policy changes by the incoming Biden administration.

Maxar was also unable to finalize a subcontract with Aerojet Rocketdyne, which was to provide the PPE’s electric propulsion system, because development problems with that system made Aerojet unwilling to accept a fixed-price contract. Maxar is now working directly with NASA on the electric thrusters, a change OIG expects to increase costs.

With HALO, NASA took far longer than planned to define its contract with Northrop because of the decision to launch it with PPE as well as changing HALO requirements. NASA is no longer planning to develop a second habitation module for Gateway, forcing changes to the design of HALO. Northrop continued to work on the project during this time under a cost-plus arrangement.

NASA justified its decision to make a sole-source award to Northrop because it concluded it was the only company who could have HALO ready in time to support a 2024 mission based on its work under an earlier habitat development program. That earlier program, though, “produced a mock-up rather than a true prototype,” OIG stated, because of a lack of specific mission requirements, contributing the delay in finalizing a contract.

“Given that NASA will likely be unable to use the Gateway to support the 2024 lunar landing,” OIG concluded, “the use of full and open competition for HALO would have positioned the Agency to more thoroughly determine its requirements in preparation for a solicitation, and potentially reduce the costs of HALO development.”

OIG offered several recommendations regarding contract requirements and schedules, which NASA accepted in a response included in the report. But, OIG warned that NASA’s current approach “increases the risk of future schedule delays and additional cost increases.”