The Long March 5B heavy-lift rocket to launch China’s first space station module is soon to be assembled at Wenchang for launch in April.
SpaceNews 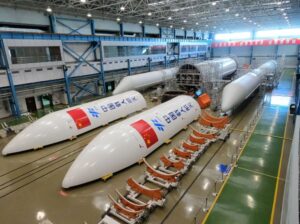 HELSINKI — The Long March 5B heavy-lift rocket to launch China’s first space station module is soon to be assembled at Wenchang for launch in April.

The China Aerospace Science and Technology Corp. (CASC) stated Thursday that the Long March 5B was headed for Wenchang, citing a Feb. 16 press release from the China Manned Space Engineering Office (CMSEO).

Ship tracking indicates that the Xu Yang 16 cargo ship traveled from Tianjin, the northern city in which the Long March 5B components are manufactured, arriving at Qinglan harbor Feb. 16. The vessel is apparently being used instead of the dedicated Yuanwang-21 and -22 cargo ships.

China has not announced a timeframe for the mission. However previous Long March 5-series rocket launch campaigns have lasted around two months, indicating launch can be expected around mid-to-late April.

The 16.6-meter-long, 4.2-meter-diameter Tianhe core module has already been delivered to Wenchang ready for launch preparations.

Tianhe, meaning “harmony of the heavens”, is planned to be inserted directly into a low Earth orbit with an apogee of around 370 kilometers and inclined by 41 degrees.

The module will provide regenerative life support and living space for three astronauts as well as propulsion to maintain the orbit of the entire complex.

China plans to construct its space station through 11 launches carried out across 2021 and 2022. These consist of three module launches, four Tianzhou cargo missions and four crewed flights.

Launch of Tianhe is to be followed by a Long March 7 launch of the Tianzhou-2 cargo vessel to dock with, fuel and supply Tianhe. The Long March 7 is also in the final stages of preparation.

The first crewed mission, Shenzhou-12, will then launch from Jiuqun via a Long March 2F hypergolic rocket. CMSEO stated Feb. 16 that the selected crew have entered the intensive training phase ahead of the mission.

CASC states that the 12th and 13th Long March 2F rockets for launching the Shenzhou-12 and Shenzhou-13 missions are ready for action. This suggests two crewed missions in 2021, the first likely during the first half of the year.

The launch of Tianhe will mark the construction phase of the three-module low Earth orbit Chinese space station, a project approved in 1992 as part of a human spaceflight program.

Starting in 2003 China has launched six crewed missions and two testbed space laboratories in order to develop and verify a range of technologies and capabilities for the project.

The most recent was the 2016 month-long Shenzhou-11 mission to Tiangong-2 space lab. The latter was deorbited in 2018, avoiding a repeat of the uncontrolled Tiangong-1 reentry scenario.

In April 2020 carried out a test launch of the Long March 5B, debuting a prototype new generation crew spacecraft for deep space. The new, uncrewed craft was loaded with propellant to simulate a payload similar in mass to a space station module.

Notably the rocket’s large core stage reached orbital velocity and subsequently made an uncontrolled reentry off the west coast of Africa days later. A similar event can thus be expected for the launch of Tianhe and later experiment modules.

The launch of the Tianhe core module was delayed by the 2017 launch failure of the second Long March 5, postponing test launch of the Long March 5B. China is now condensing the space station construction schedule into an intensive two-year period, maintaining the target of completing the Chinese Space Station by the end of 2022.

After completion the CSS will be joined in orbit by the Xuntian optical module, a co-orbiting, Hubble-class space telescope. Xuntian will be capable of docking with the CSS for maintenance and repairs. The space station itself could also be expanded from three to six modules.

CASC is planning to carry out at least 40 launches in what would be a busiest year yet for China. The landing attempt of the Tianwen-1 Mars rover is expected in May-June, amid the Tianhe, Tianzhou and Shenzhou launches.