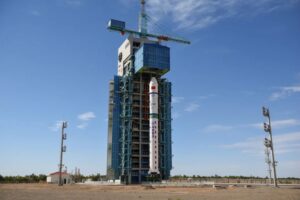 The Long March 2D rocket carrying the satellites lifted off from Jiuquan in the Gobi Desert at 10:27 p.m. Eastern.

The China Aerospace Science and Technology Corporation (CASC) confirmed (Chinese) the launch, mission success and the payloads within the hour.

The Gaofen-9 (05) optical remote sensing satellite follows the launch of the third Gaofen-9 satellite in June and the fourth earlier this month. Previous satellites were capable of providing sub-meter resolution imagery.

Also sent into orbit was Tiantuo-5, a small satellite developed by the National University of Defense Technology. Tiantuo satellites are experimental satellites carrying remote sensing and other payloads including AIS receivers.

A ‘multi-functional test satellite’ and developed by the People’s Liberation Army is the final passenger. It will test and verify new technologies related to communications, navigation, and remote sensing.

The program was initiated in 2010 to provide all-weather, all-day coverage with optical and synthetic aperture radar satellites. CHEOS may also include airborne and near-space systems such as stratospheric balloons.

The Yaogan satellite series is the military reconnaissance counterpart which utilizes similar technology and platforms.

Saturday’s launch was the 23rd for China in 2020, including launches of the Long March 5B, which paves the way for launch of Chinese space station modules in 2021, and the Long March 5, which last month launched the country’s first independent interplanetary mission.

The 23 includes three failures. The inaugural launches of the Long March 7A and Kuaizhou-11 launch vehicles ended in failure. The workhorse Long March 3B also suffered an issue, resulting in loss of the Indonesian Palapa-1 communications satellite.

The major upcoming Chinese mission in 2020 is the Chang’e-5 lunar sample return, to launch on a Long March 5 around late November.