Chinese Earth observation Gaofen-13 is on its way to a geostationary orbit after successful launch on a Long March 3B from Xichang Oct. 11.
SpaceNews 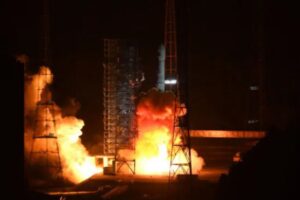 HELSINKI — Chinese Earth observation Gaofen-13 is on its way to a geostationary orbit after successful launch on a Long March 3B from Xichang Oct. 11.

The Long March 3B lifted off from Xichang, southwest China at 12:57 p.m. Eastern. The China Aerospace Science and Technology Corp. (CASC) confirmed launch success just over an hour later (Chinese).

It is the first launch from the busiest of China’s four launch sites since July 9. The site underwent renovations and upgrades involving launch towers, refueling, power supply and communications to boost reliability, safety and cadence.

The renovations are aimed at improving annual launch capacity from around 17 to about 30 launches. Xichang is expected to see a further five to six missions in the fourth quarter. Sunday’s launch also involved the first use of an upgraded payload fairing for the Long March 3B.

The constellation includes a range of optical and synthetic aperture radar satellites in low Earth orbit. Gaofen-4 was previously the only satellite in geostationary orbit.

Little has been revealed of the Gaofen-13 satellite. Likewise—and in contrast to many earlier satellites in the series—few details of the Gaofen-11 satellites have been released. Renders of the satellites on mission control screens suggest these are large (1.5-meter-diameter-plus) aperture optical remote sensing satellites.

CHEOS was initiated in 2010 to provide all-weather, all-day coverage with optical and synthetic aperture radar satellites. CHEOS may also include airborne and near-space systems such as stratospheric balloons.

Yaogan satellite series are understood to be military reconnaissance counterparts which utilize similar technology and platforms.

Sunday’s launch was China’s 30th in 2020 including major launches of interplanetary spacecraft and space station-related launch vehicles. Four of the 30 ended in failure. Inaugural launches of the Long March 7A and the Expace Kuaizhou-11 failed, while an issue with the workhorse Long March 3B led to the loss of the Indonesian Palapa-N1 communications satellite. Most recently Sept. 12 saw the loss of a Kuaizhou-1A rocket and a commercial remote sensing satellite.

CASC stated early January that it intended to carry out around 40 launches in 2020. A Long March 6 is expected to launch nine satellites for Satellogic, a company headquartered in Buenos Aires, October 14.

Preparations for launch of the Chang’e-5 lunar sample return are underway at the coastal Wenchang launch center. A heavy-lift Long March 5 will launch the roughly eight-metric-ton spacecraft in late November.

An inaugural launch of an expendable Long March 8 is expected December 20 from Wenchang.