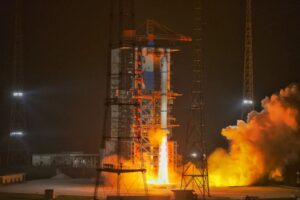 The trio of satellites are expected to orbit in a roughly 600 kilometer altitude orbit inclined by 35 degrees. They join six earlier groups of Yaogan-30 designated satellites in similar orbits. The first Yaogan-30 trio was launched in September 2017.

No details of the satellites have been released. Chinese state media reports state that the satellites will be used for “electromagnetic environment detection and related tests”.

Yaogan series satellites are however perceived by outside analysts to be designated for military purposes. The Yaogan-30 constellation could provide frequent revisits for electronic or signals intelligence as well as optical and radar imaging.

Tianqi-6, described as a data acquisition satellite, was also on the flight. The satellite belongs to commercial company Beijing Guodian Gaoke Technology Co. Ltd. The satellite is part of technology verification tests for the narrow-band Internet of Things constellation.

The launch was hailed as the 350th of the Long March rocket families by CASC. It was the 57th launch of the Long March 2C and the mission included a number of upgrades to the rocket relating to the structural design and launch process.

The payload fairing was equipped with a landing zone safety control system according to the China Academy of Launch Vehicle Technology (CALT), a launch vehicle manufacturer subordinate to CASC.

The July 2019 launch of a Long March 2C carrying three Yaogan-30 (group 5) satellites included four grid fins as part of tests for future reusability of newer rocket models. The test has not been repeated so far with the Long March 2C.

Monday’s launch is the second in 15 days from Xichang, which has undergone upgrades and repairs in recent months. The renovations are aimed at improving Xichang’s annual launch capacity.

CASC stated early January that it intended to carry out around 40 launches in 2020. So far CASC has launched 27 times including two failures. CASIC, a giant state-owned enterprise and defense contractor, has launched four times. This included the failure of the debut launch of the Kuaizhou-11 and the loss of a smaller Kuaizhou-1A rocket in September.

CASC still has a number of missions planned for 2020. These include launching remote sensing satellites for Argentina-based Satellogic in early November from Taiyuan. Preparations for launch of the Chang’e-5 lunar sample return are underway at the coastal Wenchang launch center. A heavy-lift Long March 5 is expected to launch the roughly eight-metric-ton wet mass Chang’e-5 spacecraft in late November.

The inaugural launch of an expendable Long March 8 is expected late December from Wenchang.

Galactic Energy, a commercial launch company, could launch its first rocket in the first week of November.