China has outlined an architecture for getting astronauts to the moon and back as part of plans for long-term lunar exploration.
SpaceNews 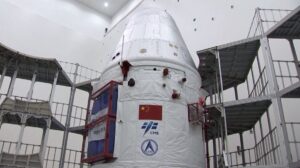 HELSINKI — China has outlined a proposed architecture for getting astronauts to the moon and back as part of plans for long-term lunar exploration.

A presentation at the 2020 China Space Conference in September details infrastructure including a new launch vehicle, new-generation spacecraft and a lunar lander, along with a potential lunar orbit module and crewed roving vehicle.

The prospective mission profile laid out in the presentation involves separate launches of crewed spacecraft and a lunar landing stack. The two would then rendezvous and dock once in lunar orbit before descending to the lunar surface.

A service module would remain in low lunar orbit and rendezvous with an ascent vehicle designed to carry astronauts from the moon’s surface.

There is no official word from China stating that a crewed lunar landing program has been approved. No timeline was offered at the event held in Fuzhou, capital of Fujian province.

However numerous statements from space officials indicate that China is aiming to eventually put astronauts on the moon and is already developing the pieces of the puzzle required to do so.

A new-generation crew spacecraft capable of transporting astronauts beyond low Earth orbit had a first test flight in May this year demonstrating a willingness to develop requisite capabilities.

Zhou Yanfei, deputy general designer of China’s human spaceflight program, told Chinese media during the conference that a “new wave of lunar explorations has been emerging in the world, with participants aiming to make sustainable missions to deepen knowledge of the moon and exploit resources there”. He added that “unlike other nations, China must depend on its own science and technology to realize our goals.”

The approach is in apparent contrast to the U.S. Artemis program which involves international partners.

China’s objectives would be to carry out scientific surveys and technology demonstrations, explore ways to develop lunar resources and strengthen the country’s space capabilities, Zhou said.

He noted however that such a program is very challenging with many problems and gaps in capacity still to be solved. These include developing a new launch vehicle with the requisite lift capacity.

A launcher concept using three, five-meter-diameter first stage cores and clusters of YF-100K engines—uprated versions of the YF-100 kerosene engines used by China’s new Long March 5, 6 and 7 launchers—was first displayed in 2018 and now appears to be integral to China’s plans, at least in the presentation. The new launcher would be around 87 meters long with a mass at liftoff of about 2,000 metric tons.

The Long March 9, a roughly 100-meter-long Saturn 5-class rocket for launching infrastructure for lunar and other deep space missions and long considered a key part of future Chinese lunar landing missions, does not appear in the mission profile.

Zhou further noted that development of a lander, life support, mission experience and ground support capacity for operations beyond LEO are required before such missions are possible. Technical details of the lander were not reported.

China is currently preparing to launch the Chang’e-5 lunar sample return mission in late November. That complex mission involves a lunar orbit rendezvous and docking which would thus provide robotic verification and experience of such operations. It will also test taking off from the moon and a high-speed reentry into the Earth’s atmosphere.

China is also preparing to begin its low Earth orbit space station project, with launch of the core module expected in the first half of 2021, followed by crew and cargo missions. The ten-year project will provide valuable human spaceflight experience but also command considerable resources.

China is currently drafting a 14th Five Year Plan for the period 2021-2025 which could approve a lunar landing program, or key infrastructure such as a lander and launch vehicle.

A new space white paper, expected to be released before the end of 2021, will more clearly lay out China’s plans for the next five years and may detail the status and extent of crewed lunar plan developments.

China is meanwhile preceding with robotic lunar exploration efforts which will target the moon’s south pole. The Chang’e-6, 7 and 8 and other missions are part of the country’s proposed International Lunar Research Station (ILRS) to develop a robotic base in preparation for a later crewed base.